'Or Forever Hold Your Peace' is as good of a debut album as you'll ever hear. 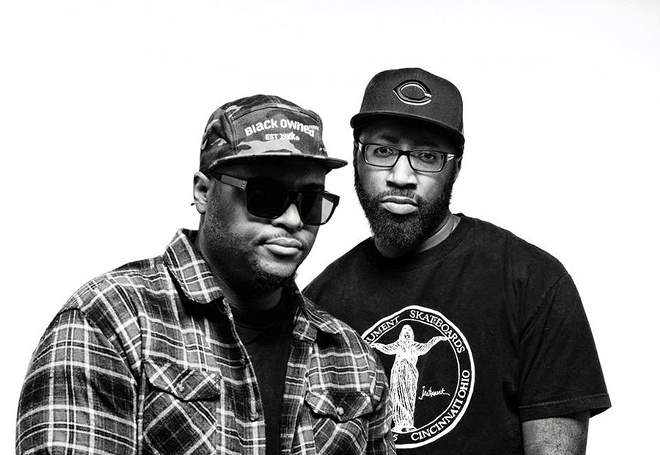 Photo: sonsofsilverton.com
Sons of Silverton’s KyleDavid and CITOAK
On May 5, dynamic Hip Hop duo Sons of Silverton released its first full-length album, the extraordinary Or Forever Hold Your Peace, which is as good of a debut album as you will ever hear. Sons of Silverton had a little head start though — the project consists of two experienced MCs with a long history in the Cincinnati Hip Hop community and beyond, so they each came into the project with their skills as rappers and lyricists honed to an extremely sharpened point. And, yes, both are from the Cincinnati neighborhood of Silverton.

SoS’s CITOAK came up in the ’90s with the consistently strong Cincinnati collective Watusi Tribe and has maintained a steady solo career, most recently releasing his album Delayed Arrival in 2014. The other half of Sons of Silverton is KyleDavid, a key member of Cincinnati group Five Deez, which formed in the ’90s and built a global following with its releases in the ’00s and its infusion of various genres like EDM and Jazz into its sound. KyleDavid has also kept busy beyond his work with the group that first brought him to public attention. In 2013, he collaborated with producer CJ the Cynic on the album The Field Work.

As a tag-team, KyleDavid and CITOAK are perfectly matched — both are smart, imaginative writers who stand well above most of their peers in the lyrics department, so the fluid effusiveness of their deliveries blends together seamlessly. Speaking of deliveries, another thing each artist has in common is a tough, tight cadence in their flows; these are skilled craftsmen at the top of their game, and hearing them deftly weave bars around each other should be a highly satisfying experience for any true student of the art of Rap.

Both SoS MCs also appear to share a passion and respect for Hip Hop history. Or Forever Hold Your Peace isn’t an “old-school” record (it definitely has a modern verve), but you hear (subtly or perhaps unintentionally) the influence of and reverence for the groundbreakers of several eras of the genre all over it.

The production and resultant musical landscapes that hover behind the rhymes and provide fierce, diverse beats also contribute to the music’s uniqueness and cross-era vibe (which in many ways makes it a rare timeless Hip Hop album). KyleDavid and CITOAK were introduced by a mutual friend to widely respected and innovative New Orleans-based producer prospek, who consistently takes the sonics of Or Forever Hold Your Peace in compelling directions, from the grinding-beat-meets-Jazz-horns atmospherics of “You Don’t Want It” to the live-sounding guitar/synth/drum-kit groove of “You Know Them As” to the bubbling electronics and strong vocal melody hook (provided by guest Diamond Star Russell) on “Great Escape.” Prospek was initially just going to do a few songs with Sons of Silverton for a potential EP, but it’s a testament to the three artists’ chemistry that it turned into an 11-track album that is engrossing from the first notes until the last.

Listening to Or Forever Hold Your Peace reminded me of another recent listening experience. Not long ago, Chuck D of Public Enemy enthusiastically tweeted about a new Nas song with DJ Shadow. I immediately listened to it (that’s a heady recommender) and my enthusiasm instantly matched Chuck’s. The track, “Systematic,” is a soaring, exhilarating reminder of all of the best elements of Hip Hop music. I felt that same surging sense of optimism about the music’s current (and future) state while exploring Or Forever Hold Your Peace.

This Friday, Sons of Silverton joins DJ crew Selectas Choice for an album release celebration at Northside Yacht Club (4227 Spring Grove Ave., Northside, northsideyachtclub.com). Showtime is 10 p.m. and there is no cover charge.

Or Forever Hold Your Peace is available to purchase and/or stream on most major digital platforms, including the duo’s Bandcamp page (sonsofsilverton1.bandcamp.com). For more on Sons of Silverton, visit sonsofsilverton.com.