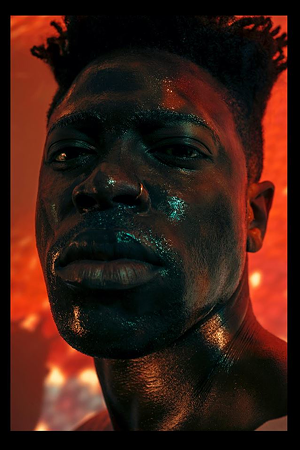 Photo: Ibra Ake
Moses Sumney performs at the late-April Homecoming festival at Smale Park.
The initial lineups for The National’s new Homecoming music fest and its member Bryce Dessner’s continuing MusicNOW suggest April 27-29 is shaping up to be a major three-day weekend for music in Cincinnati.

The National, featuring Cincinnati natives who later found success as a band in Brooklyn, N.Y., announced the Homecoming festival in December and said they would headline the April 28-29 event with a different full set each night at Smale Riverfront Park. They also said they’d soon start announcing the more than 20 acts that would perform on two stages as part of Homecoming.

The first names to be made public — some established, some relatively new — are big or buzzed-about acts in the AltRock world: Father John Misty, Feist, Future Islands, The Breeders, Lord Huron, Julien Baker, Moses Sumney, Alvvays and Big Thief. (Not all are new to Cincinnati festivals; acts like Future Islands and The Breeders, for example, have played the MidPoint Music Festival.)

Father John Misty (Josh Tillman) and The National are both nominated this year for a Grammy in the Best Alternative Music Album; he for Pure Comedy and the band for Sleep Well Beast. Some of the others have been winning accolades and showing up on end-of-the-year lists for their 2017 albums: Baker’s spare, cathartic performance of her songs on Turn Out the Lights brought cheers on Late Night with Stephen Colbert, Canadian band Alvvays’ Antisocialists has proved popular and Sumney was called by Pitchfork an “art-soul singer-songwriter (who) taps into the enduring resonance of (African American writer Langston) Hughes’ blues melancholy.”

Homecoming tickets already are for sale at ntlhomecoming.com.

Meanwhile, Dessner’s April 27-29 contemporary music festival MusicNOW also has announced its first musical acts, and there are some very intriguing names. Dessner and his twin brother Aaron (both guitarists in The National) will perform together, and others include Kaitlyn Aurelia Smith, Mouse on Mars, Kristín Anna Valtýsdóttir, Crash Ensemble, James McVinnie and Eighth Blackbird. That latter contemporary Classical ensemble will perform music by the late minimal composer Julius Eastman and also will perform with Bonnie “Prince” Billy (Will Oldham) and Bryce Dessner. Eighth Blackbird, too, will play with the Cincinnati Ballet as part of its MusicNOW-affiliated Bold Moves dance program.

Dessner has staged MusicNOW here since 2006 when it began at Contemporary Arts Center. Since then, it has primarily been centered at Memorial Hall, Music Hall and Taft Theatre. But this year’s is decentralized and will offer “citywide” events. Information on tickets for MusicNOW shows will be released in February. MusicNOW and Homecoming this year are being produced by Ashley Capp’s AC Entertainment, which also produces Knoxville’s experimental Big Ears Festival.

“I look forward to coming home to Cincinnati every spring for the MusicNOW festival, which has become a huge part of my artistic life,” Dessner said in the announcement released on Monday. “I am unbelievably excited to invite my bandmates and fellow Cincinnatians from The National this year to join me in creating a new outdoor event called Homecoming that will feature performances from many of our favorite artists in the world."

In an email, Capps said that he and Dessner "enjoyed collaborating back in 2010 when he curated the second Big Ears festival with me.  Since then, he’s played Big Ears every year but one, as I recall, and we’ve shared many ideas, including about ways for MusicNOW to grow and evolve, including the idea of incorporating an outdoor component.

"At the same time, the National has grown to become a major band, and we started discussing creating a special way to celebrate their Cincinnati roots and to do something a bit beyond the scope of having their show here be simply another date on the tour.  More and more, as we talked, we all felt that  ti made sense to explore synergies between these two ideas, so we now have two great festivals - each with its own distinct character but also with interesting interfaces and connections and chemistry between them. It’s very exciting and totally unique."

Of the acts announced on Monday for MusicNOW, one of the most promising is the program being offered by Eighth Blackbird. At Big Ears two years ago, Eighth Blackbird and Oldham collaborated on an electrifying performance of a work of New Music called “Coming Together,” by the composer Frederic Rzewski and based on a letter that the radical Sam Melville wrote while imprisoned at New York’s Attica State Prison in 1971. Quite poetic, it was about how Melville was working on understanding himself and his surroundings and implies deep soul-searching. Melville subsequently died in the Attica uprising later that year, and in their performance Oldham kept repeating from the letter as he worked himself into a state of agitation. It was cathartic and beautifully elegiac. Capps said they will do that again in Cincinnati.

The Eastman program also is intriguing. He was America’s foremost African American composer of minimalist Classical music, known for the politically charged and confrontational titles of his work. But he died largely forgotten in 1990, having experienced homelessness. He has been enjoying quite a comeback in recent years, however, with recordings of his work being issued and a biography published.

Among those who have played a role in Eastman’s rediscovery is Jace Clayton, whose performance piece “Julius Eastman’s Memorial Dinner” had its world premiere at the Contemporary Arts Center in 2013. It went on to be performed at Big Ears in 2017.