The Dollyrots’ new rarities album, "Down the Rabbit Hole," wasn’t inspired by the pandemic — it was caused by it 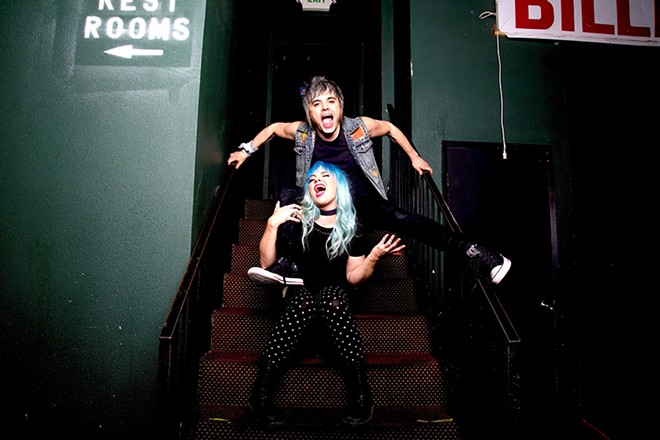 When the husband-and-wife duo Luis Cabezas and Kelly Ogden, aka the Punk Rock band The Dollyrots, began working on the follow-up to their 2019 album Daydream Explosion, they came to a rather startling conclusion: They didn’t have anything particularly interesting to say.

The Dollyrots’ condition has been fairly common among musicians during the COVID-19 pandemic. Confronted with the same environment and housemates (for Ogden and Cabezas, that includes their 8-year-old son and 6-year-old daughter) for an extended period of time, the well of inspiration goes slightly dry.

“COVID kind of murdered our creativity,” Ogden says from her Florida home studio, where she records her daily radio show for SiriusXM. “We kept our kids home for one full year. We were stuck in our four walls with our two tiny kids and me doing my radio show and just kind of losing our minds. At the end of every night, we’d go, ‘Do you want to write some music?’ and most of the time, the answer was, ‘No.’”

Late last year, Ogden and Cabezas realized it was going on three years since they’d released an album and, with little new material in the pipeline, their only acceptable option was to do a deep dive in the Dollyrots’ archive and assemble a rarities collection. That kind of project can often be time-consuming and frustrating, considering the physical act of locating songs and creating a solid album out of relatively disparate material recorded at different times.

Cabezas’ logic for the rarities project was that the band has been around for two decades and had more than enough music — especially considering the B-sides from Daydream Explosion, which they released on musician Steven Van Zandt’s Wicked Cool Records (Ogden’s radio show is also on Van Zandt’s SiriusXM channel, Underground Garage).

But the duo was almost immediately confronted with improbabilities stacked on impossibilities.

“That was on a Thursday,” Ogden says. “Luis called Wicked Cool Records, and Dennis (Mortensen), who we work with over there, said, ‘Why don’t you put it out with Wicked Cool?’ And Luis was like, ‘Alright, but we really want to have it in time for Christmas. When would we have to turn it in?’ Dennis was like, ‘Let me call you back.’ He called back and said, ‘I’ll need it Tuesday.’”

With just days to meet a seemingly unattainable deadline, Ogden and Cabezas hit the ground running.

“Fortunately, we have an awesome team that we work with,” Ogden says. “Luis dug through the hard drives very quickly, we picked the songs, he remixed a couple of things that were in need of a boost here and there, then we sent it off to be mastered.”

The focus then shifted to perhaps the most laborious and time-critical task: making the artwork for the album. They contacted Austrian graphic designer Stefan Beham, who they have relied on in the past, and asked about the possibility of a design miracle.

“We were like, ‘Stefan, is there any way in hell you could get us a layout for a new double CD by Monday?’” Ogden says. “And he totally did it. He nailed the concept. It was absolutely perfect.”

Cabezas was then left with the hardest job of all — organizing the album’s 24 tracks into a listenable running order. The final list included rarities, B-sides and cover songs. Ask any recording artist or band about the one thing they dread about a new album and most will cite the need to establish a track order.

“Luis came up with the sequence, which was really hard, because it’s weird to have all these 24 tracks; three of them are brand new and the rest of them are from all kinds of different recording situations and times and places,” Ogden says. “So to make it sound cohesive, we were kind of nervous, but somehow the track order and mastering all magically came together. When we listened to it the first time, we looked at each other and we were like, ‘Wow, this is actually cool. I think I like this.’”

The resulting album, Down the Rabbit Hole, might not have snapped into reality with such speed if not for Ogden’s and Cabezas’ aforementioned 20-year history. This project specifically — as well as their longevity as a band and a couple in general (they met in Land O’ Lakes, Florida in junior high, became a couple in high school and started a band in college) — is a testament to their professional and personal chemistry and their work ethic, which includes an almost supernatural planning ability. 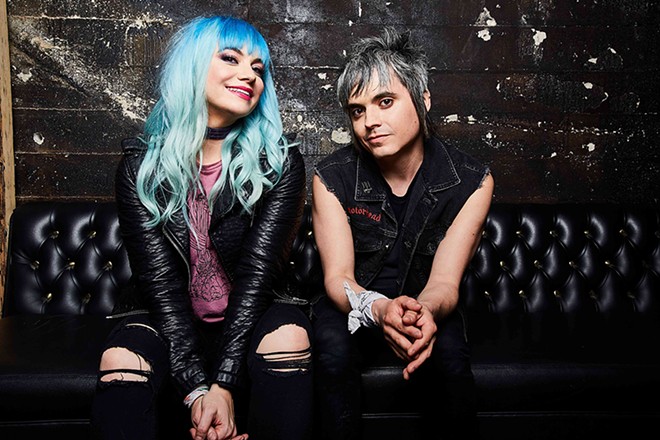 A case in point: Ogden and Cabezas scheduled Ogden’s pregnancies so each would occur during a single calendar year to avoid paying extra medical deductibles, while continuing Dollyrots business as usual. The band was still touring when Ogden was in the eighth month of her first pregnancy, and they were on the verge of finding out whether or not Ogden would even be up to the task of being both a mother and the Dollyrots’ bassist and vocalist.

“Luis and I wanted to have babies together before we had a band together. The clock was ticking and it was like, ‘If we’re going to do this kid thing, we’ve got to do it,’” Ogden says. “So we were like, ‘It’s got to be in one calendar year, so we’ll plan the tour to be in this month so we’ll be home in this month.’ And it all worked out, which was awesome. We’ve planned every moment. What we didn’t know is if I’d find it too overwhelming to tour with a baby, if my mentality would allow me to perform.”

Ogden and Cabezas got an almost immediate response to that question when they were preparing for the arrival of their first child in 2013. They had just finished their fifth album, the aptly titled Barefoot and Pregnant.

“I was eight months pregnant, and we sold our tour van,” Ogden says. “We were cleaning out the van and we were both crying, ‘What if we never tour again?’ That week we got asked to do Southern California dates with Black Flag, and then I cried even harder. Then I ended up having a traumatic birth with an emergency C-section, which was the cherry on top.”

But Ogden found her rhythm in the music as well as in life.

“I was onstage at the House of Blues in (Orange County), and my baby was backstage, and I was playing a show, eight weeks post-birth,” Ogden says. “I was so terrified, but one minute into the first song, everything went back to normal. Now I get to visit that every time we get onstage and it’s awesome. And all the rest of the time, I can mom. That’s pretty cool.”

In their two decades as the Dollyrots (in college, they were known as No Chef; the name change came in 2000), Ogden and Cabezas have notched a number of impressive accomplishments. They’ve had their songs used in a number of high-profile commercials and television shows; appeared on several TV shows, including CSI: NY, Greek and (swear to god) The Price is Right; signed to Joan Jett’s Blackheart Records for two albums; came in second to Spinal Tap for number of drummers (none of whom died as a result); opened for Jett, the Breeders, the Go-Go’s, Buzzcocks, the Donnas and dozens of others; and released eight studio albums, one live DVD/CD set, six EPs and over 30 singles, among other jaw-dropping bullet points.

And if Down the Rabbit Hole has you wondering if the Dollyrots emptied the archive to assemble the album, Ogden gives every assurance that more volumes are possible down the road.

“We still have so much stuff,” she says with a laugh. “We had to narrow it down. We were asking friends, ‘This song or this song, which one do you like better?’ So we still have a lot left.”

And then Ogden specifically mentions cover songs. There are a handful of them on Down the Rabbit Hole, including a version of Tom Petty’s “American Girl,” the Penguins’ “Earth Angel” and Billy Idol’s “Dancing with Myself.”

“As far as covers, these (on Down the Rabbit Hole) are personal to us, that all mean something, and that’s why we picked them. But we have a whole bunch of acoustic covers that we’ve recorded over the past 10 years or so,” Ogden says.

“A lot of times, we get asked to do covers of songs we’re not totally familiar with, or that we’re not huge fans of. Luis will say, ‘I don’t even like this song but we’re gonna record it.’ We’ll do covers for fans as gifts or for weddings or things like that. So we probably have a double album’s worth of acoustic covers.”

Sounds great. Can you have it ready by next Tuesday?