In Advance of Her Riverfront Live Show, Samantha Fish Talks About Honing Her Songwriting Chops for Latest Album

A few months before the pandemic shut everything down, singer-guitarist Samantha Fish released her latest album, "Kill or Be Kind." 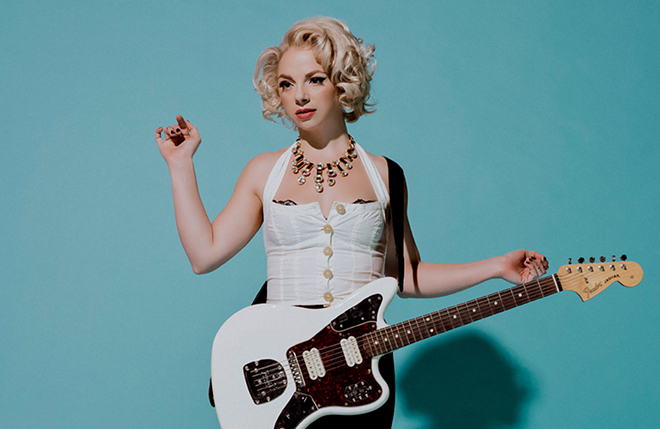 A few months before the pandemic shut everything down, singer-guitarist Samantha Fish released her latest album, Kill or Be Kind. Frustratingly, Fish, who usually spends the majority of the year on the road, couldn’t tour as much as she would’ve liked in support on the disc.

Last month, however, she booked a few dates in Texas and says she really enjoyed the opportunity to play the socially distanced shows.

“Of course, Texas is more open than other parts of the country, but we’re doing our part to keep everybody safe,” she says recently via phone while driving home from the tour. Fish performs at 8 p.m. on Friday, April 23, at the Riverfront Live.

“We’re following our protocols and guidelines. Sometimes, it’s like herding cats, but it’s been nice to be able to play in a safe way. When we shut down in March (of last year), I had nothing until October when we did a short string of dates. It’s been terrible. It’s hard to watch what people are going through.”

Originally, Fish set out to become a drummer, but after seeing the Blues singer-guitarists that regularly came through Kansas City to play at Knuckleheads, the hometown club she frequented as a teenager, she decided to shift gears and become a front person.

She’s steadily released albums and toured for the past decade.If there’s any sort of silver lining to the stay-at-home orders, it’s that she’s had more time to write.

“That’s what I’ve kept myself busy doing,” she says. “It didn’t sink in for me personally until June that this was a long haul thing. I still had dates in July, so it felt like maybe it would be OK. In summer, it sunk in, and I knew I had to change gears. I have never had the opportunity to write from a stationary spot. I’m on the road so much that when I write, I’m doing it in hotel rooms and at sound checks and between shows. It’s always been stressful to put together records. To be able to wake up everyday and just channel my creativity has been great. I will say, however, that being stuck in one place is not as conducive to creativity. But I’ll be honest. I wrote more songs this past year than I ever have.”

For Kill or Be Kind, Fish says she set out to hone her songwriting skills and emphasize her guitar playing abilities. She collaborated on the songs with writers such as Jim McCormick (who has worked with her before and also written for Luke Bryan and Keith Urban), Kate Pearlman (who has worked with Kelly Clarkson), Patrick Sweeney, Parker Millsap and Eric McFadden.

“I worked with more collaborative partners on the writing side of things than I ever have before,” she says. “I set out to grow as a songwriter. That was my primary mission. It was the also the first time I was the sole guitar player on a record. I know that sounds crazy, but I always previously worked with producers who were incredible guitar players on their own rights or knew incredible guitarists. I never really led the charge on that, so I really wanted to expand on my skills on that. I wanted to expand on my skills for that. I wanted them to sound really contemporary and up the production and just make something modern that sounds timeless."

The album represents Fish’s most eclectic work to date.

“The songs are wildly diverse,” she says. “Doing (the record) at Royal Studios in Memphis really shaped the sound of the record in a way. There’s so much history there. If you do a Google search, you can see that. I was recording on Al Green’s microphone and using the Anne Peebles’ drum machine. It can’t help but inspire and shape the overall shape of the record.”

Fish’s voice becomes a focal point on the album, and her vocals sound stronger than ever as she really wails on tunes such as the bluesy “Watch It Die,” where it sounds like she’s competing with the horns for attention.

“I’m always competing with the horns,” Fish laughs. “I think singing in the studio is such an interesting thing. In my earlier experiences, I was a little intimidated. When you put the headphones on and sing into that microphone, there is such a clarity and intimacy and you hear every flaw and inconsistency. When I first started making albums, that kind of would freak me out a little bit. I have been singing a lot now and working on it a lot. Your voice changes as you get older too. I definitely wanted to nail the vocals on this record. Over the years, people would come up to me and say that my singing at the shows was better than it was on the albums. That’s always a downer. I really focused on nailing these vocals.”

The album ends with “You Got It Bad,” a song that features some really noisy distorted guitars. It serves as a potent closing number.

“There were a lot of songs about relationships and love on the album,” Fish says when asked about the decision to make it the album closer. "'You Got It Bad’ is about chasing down your dreams and being owned by them. You put everything else secondary to chasing down this thing that you’re hungry for. Topically, it felt like ('You Got It Bad') was a little bit bigger than just another heartbreak song. It is also kind of an anthem, and it just rocks, so it felt like a good way to close the album.”

For the current tour, Fish has stripped things down to a trio, so she can safely navigate touring in the midst of the pandemic. It's a format that she's comfortable with too.

“We’re trying to keep our bubble as small as possible," she says. "We had to really strip things back. It’s been really fun. I started playing with a trio and did that for the majority of my career. The big band thing has only been going on since 2017. It’s been nice and it’s good for my guitar chops. I feel like I have to go out there and do some heavy lifting. There’s so much room in a trio for dynamics and improvisation. It’s been a lot of fun.”

This story was originally published by CityBeat sister paper the Cleveland Scene and republished here with permission.