Fitzsimmons talks about the erase-and-rebuild recording process of his latest album and the unique bond he has with his fanbase ahead of his appearance at Newport, Kentucky's Southgate House Revival on Feb. 9 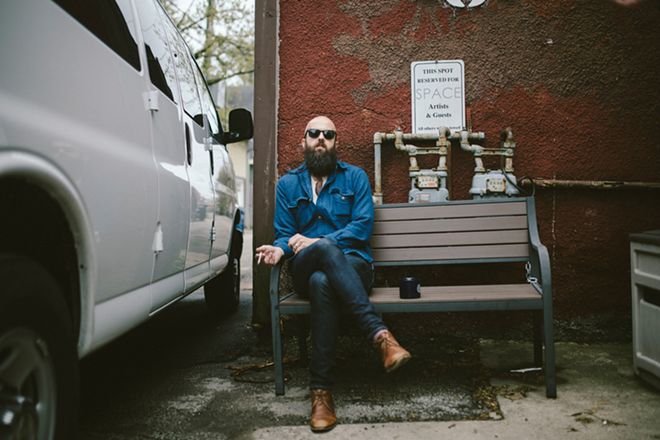 His collection of home-recorded songs was packed with exorcized demons and the painful emotion of a recent divorce. And when the recording was finished, he erased each track.

Then, the songs were brought back to life in Nashville with producer Adam Landry, whose résumé includes work with Deer Tick, Los Lobos and k.d. lang.

“Having to let go of the first version of this record was incredibly strange and something I’ve never done before,” Fitzsimmons said in a press release for the album. “I deleted every note and every word. Landry (and I) spent weeks upon weeks breathing back life into a project that I thought was lost for good. By the time we finished, I felt like I had reclaimed something that was taken from me and I remain terribly proud of this work as a result.”

“The arrangements are different than what I would have done,” he adds during a recent phone interview. “They (allow me to) feel differently than my demo versions did.”

On “Leave Her” he sings: “You can take my words and my songs but leave her.” The songwriter’s bootless cry may not have sprung from a place fruitful for his personal well-being, but for the rest of us, it resulted in an artistic masterpiece of the broken heart.  Lyrically, the album is emotionally gutting, artfully recalling relationship falters and failures, while ultimately detailing small steps forward. “You can take the kids on Tuesdays and every other weekend/I’ll be fine with holiday arrangements on my own,” he sings, defeated, on “Distant Lovers.”

Backstory and lyrical content aside, Fitzsimmons’ Mission Bell — his 11th album — is a sonic marvel. In addition to Landry’s input, this one has contributions from fellow singer/songwriters Abby Gundersen and Rosie Thomas. It’s also his most directly connecting album. Musically lush and expansive, the serene Chamber Folk collection recalls the soft-spoken introspection of Sufjan Stevens, Elliott Smith and Iron & Wine.

“It was going back to just, ‘Let’s find some really cool sounds that we think help to convey the message, and put them to tape,’ ” he says.

When Fitzsimmons says “tape,” he’s being literal. He and Landry took an analog approach to recording the album, which was initially a bit unnerving.

“Prior to doing this record, I had gone pretty deep into the digital world of audio recording,” he says. “Not that there’s necessarily anything wrong with that, but I had avoided the analog world because I knew it was risky, costly, and there was an inability to make digital edits — the ‘fix it in post’ idea. But I had gone so deep (into digital recording) that I was losing something special about the performances.”

Fitzsimmons admits that when the recording process for Mission Bell started, he was “terrified.”

“When you’re in the control room, and (Landy) hits ‘record’ and you see the 2-inch tape actually start to spin, your heart rate goes up and you think, ‘We’ve got to play this really well.’ You either do it or you don’t,” he says. “This record feels differently because it’s more of a performance than a bunch of pieces glued together after the fact.”

Revisiting the material added another layer of complexity to the project. He recalls a couple times “being brought to tears,” listening to the studio playback of certain songs.

In addition to Landry, the contributions of Gundersen and Thomas, both established artists in their own right, helped direct the material’s path.

“Abby is a longtime friend, and I’ve been recording with her for a long time. Rosie has become a very close friend (as well),” Fitzsimmons says. “They brought the same kind of energy that Adam has — they wanted to do something great. They actually believed in the songs, it’s as simple as that. It was a joy to have them on the record, and I care about both of them a lot.”

Despite the heavy lyrical subject, the album does contain some fairly upbeat song structures. “Second Hand Smoke” opens the release as an instantly engaging single. “Where did we go so wrong?” Gundersen asks in song, with Fitzsimmons replying, “I was hiding from the rain and the rolling thunder.” Meanwhile, the storyline is propelled with crisp percussion, electric organ and reverb-soaked electric guitar accents.

Fitzsimmons’ painfully open and frank storytelling was no doubt developed in part by his master’s degree in counseling and work with the mentally ill. He’s also fairly well versed in broken-heartedness. The youngest child of blind parents, his second album, Goodnight, was reported to be about their divorce during his adolescence; its follow-up, 2008’s The Sparrow and the Crow, is a reflection of Fitzsimmons’ first divorce.

Life experiences like these are not easy to come to terms with, but the singer/songwriter’s audience has come to be eager to connect with him, seemingly on a deeper level than most fanbases. Fitzsimmons appreciates that unique bond and notes an admiration in watching his following grow with him over the course of his 15-year career.

Looking ahead, Fitzsimmons says that discussions are already underway for his next album — and that they’ve been significantly impacted by the Mission Bell sessions, especially his collaboration with Landry.

“Adam and I were already talking about (the next album) toward the end of this recording, since it was such a great experience,” he says. “It feels like we have a ceiling we haven’t hit yet.”

Some collaborations, it would seem, do bring out the best in us. For fans of William Fitzsimmons, the best may be yet to come.