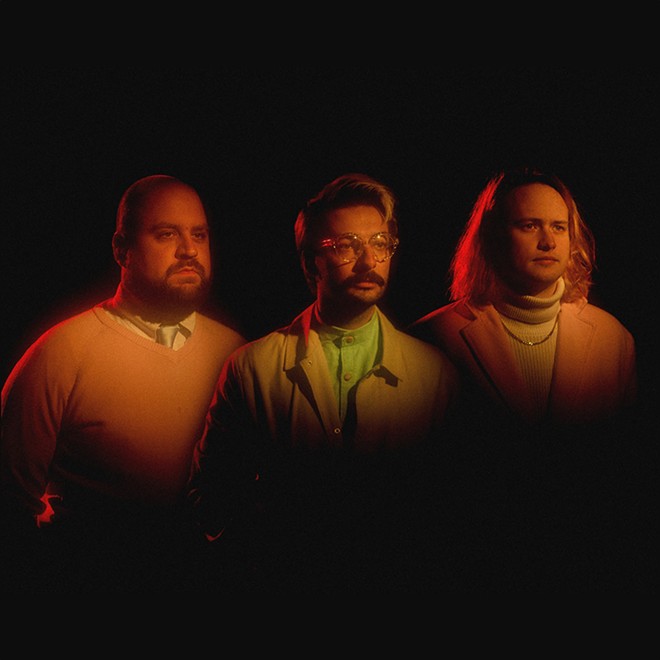 Foxing is an interesting case. The St. Louis-based band — which currently consists of drummer Jon Hellwig, guitarist Eric Hudson and singer Conor Murphy — has been around more than a decade, building a strong following without quite breaking through to a wider audience. The sound of their four albums has evolved over the years, moving from Sigur Ros-influenced emo atmospherics to something close to pop, an indie rock outfit with uncommon dexterity and elasticity.

But what does “indie rock” mean these days? Is it a sound? Is it doing it yourself through independent means? In Foxing’s case, it’s both. They released their most recent record, 2021’s Draw Down the Moon, through their own label, Grand Paradise, with distribution help from long-running indie label Hopeless Records. On the sonic side, if 2018’s critical breakthrough, Nearer My God, was their grandiose, often ominous art-rock opus, Draw Down the Moon is their four-on-the-floor, chorus-rousing attempt at positivity. Take album centerpiece “Where the Lightning Strikes Twice,” a rafter-reaching blast of dance rock juiced by Murphy’s eruptive vocals and featuring an effects-altered guitar solo from Hudson that sounds like Adrian Belew if raised on Jonny Greenwood instead of Jimi Hendrix.

But both records have a unifying element: Foxing’s creative trajectory has occurred alongside one of the most contentious social and political eras in memory. And then COVID-19 hit.

“I think Nearer My God was a reaction to this feeling of existential dread and impending doom, feeling like you have no control over anything that is happening, so I guess we’re going to make our silly songs as like a coping mechanism,” Hudson says by phone from his apartment in St. Louis. “With Draw Down the Moon, even though that record doesn’t have as many obvious political references like the third record does, it's still impacted (by everything going on). It is a COVID record. We made it during quarantine.”

The isolation complicated things in numerous ways, altering the band’s songwriting process. Murphy, who writes all the lyrics, took the lead, investigating themes at once cosmically grandiose and deeply personal. He came out as bisexual during the writing of the record, an admission that didn’t come easy, given his strict religious upbringing.

“It was definitely a departure in the sense that previously it was like Conor had to find his space around whatever the band was doing,” Hudson says. “I feel like this time around it was kind of the opposite approach where the band was like, ‘Well, why don’t we create a space for Conor and we will find our areas of expression around him?’”

Album opener “737” begins pensively with airy synths, lightly strummed guitars and Murphy repeatedly pleading “I can’t do this alone” before erupting into Deafheaven-esque chaos. The quiet, acoustic-based “At Least We Found the Floor” initially seems down and out with Murphy singing, “Well, honey, this isn’t the floor yet/It’s gonna get much worse than this,” but it’s delivered with an oddly subversive acceptance. And “Cold Blooded” is a straight-up anthem in Arcade Fire mode, but with a more versatile singer leading the way.

“Instead of leaning into the negativity, which is something we’ve always done in the past, the positive thing that we got out of making that record was finding peace without having control over everything and finding some amount of acceptance with your existence in your small place in the universe,” Hudson says. “Which in itself is a little sad. It’s bittersweet in a way because if you can accept what you can control and accept what you can’t, and come to terms with it, I think it makes it easier to appreciate the things you do have. A lot of Draw Down the Moon is based around that.”

“Beacons,” via its booming drums and electro enticements, might be the most blissfully exuberant expressions on the new record, as Murphy sings, “Beacons of that shame left behind/For the first time I felt alive.”

Likewise, the sonic approach is glossier and more approachable than previous Foxing efforts. Hudson handled production duties for the first time with help from Manchester Orchestra frontman/longtime buddy Andy Hull and a mixing assist from noted nob turner John Congleton, who’s worked with everyone from St. Vincent to Swans.

“We found that it gave us more control over our process and our sound,” Hudson says of the decision to oversee the production. “In addition to that I think it also allowed us more time to really figure out where we were going as opposed to being under the gun of having ‘x’ amount of studio time and a budget that is ‘x’ amount of dollars. For me, it was just a practical choice that then turned into something that I’ve become passionate about.”

But that’s not to say it was all smooth sailing. Hudson was initially taken aback by some of Congleton’s choices.

“When he sent the first few mixes back, admittedly I was freaking because I was like, ‘Oh my god, this dude is radically changing these songs, and he is so much more experienced than I am and has done so much more than I have. He has a Grammy! Who am I to say that he’s wrong for doing this?’” Hudson remembers. “I had so much anxiety about it. I talked very frankly with him about that. I was like, ‘Hey, I don’t know how I feel about this.’”

Congleton assured Hudson that the process ultimately was theirs.

“His response was essentially, ‘Look, I understand why you would feel that way. You’ve spent all this time writing and recording these songs, so anything that is a radical change is going to seem crazy to you, but I’m asking you to trust my creative voice and sit with these mixes for a while, and if you still feel that way then we can backtrack,’” Hudson says. “And so I listened to that, and I think he was fully right. I think he made the songs truly a lot better.”

Hudson says he and the band learned a lot from the process, and the cherry on top was the chance to work with longtime creative inspiration Yoni Wolf, leader of Cincinnati’s own indie rock outfit Wolf contributes some ethereal vocal elements to album closer “Speak With The Dead,” a moody, musically adventurous tune about someday connecting with someone no longer with us.

Following the collaboration, Wolf sent Foxing a message explaining “how much the song resonated with him and how emotional it made him while he was working on it,” Hudson says.

“Hearing someone you truly look up to talk to you like a peer and validate the art that you’ve made and also collaborated with, that’s a special feeling,” Hudson says. “Regardless of what happens with our music moving forward, that’s something that I will always remember and cherish.”