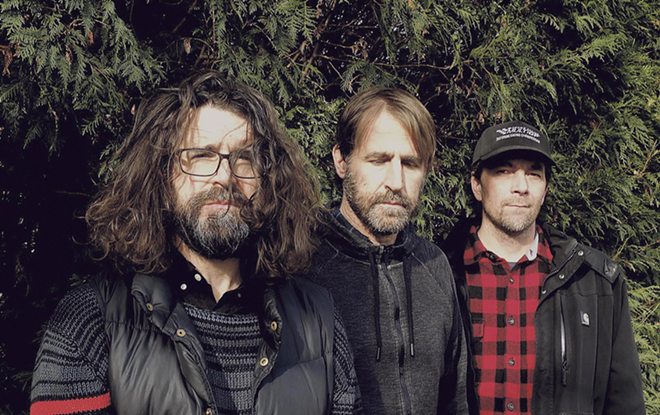 Sebadoh is on the Mount Rushmore of Indie Rock. What started 30 years ago as Lou Barlow’s bedroom side project away from his main band, Dinosaur Jr., is now recognized as one of the pillars of the genre: a lo-fi-loving, heart-on-sleeve outfit driven by the long-running collaboration between Barlow and Jason Loewenstein. (Current drummer Bob D’Amico joined in 2013.)

CityBeat recently connected with Loewenstein to discuss what has and hasn’t changed over his three decades as one of Sebadoh’s driving creative forces.

CityBeat: I noticed you worked with a producer this time out, Justin Pizzoferrato. How did that impact the new record?

Jason Loewenstein: I usually come to the recording sessions with nine songs, so I have a couple to throw away if they don’t work. We try to record everything (we have) and then later on in the process you start to see that this set of songs really starts to seem like a record and you start finessing the sequence until it seems more like an album. We paid a lot of attention to that in the past, but it ended up sounding more like a radio show because we were recording in different studios and from song to song it sounded very different.

In this case, just because the recording was in the same place, people are saying, “Wow, it is so consistent.” I think it’s almost more a result of Justin, because the songs are diverse, there’s a lot going on there, but it is a consistent production style, so I think that’s what people are sort of latching on to.

CB: When going into a new record, as a band that has put out as much material and been around for as long as you guys have, do you say to yourself, “This is or isn’t a Sebadoh song”? How much do you think about the expectation of the audience versus following whatever your current artistic interest might be?

JL: I think there is a little of both in there. What I’m realizing about myself is that, personally, I’m reactionary. I became a songwriter in this band by accident. When (founding member) Eric (Gaffney) left the band, all the sudden I had the opportunity to fill more songs in. Lou is not a same-y, same-y kind of guy but I would say there is a certain consistency to his tunes. And, in the beginning, he was going for a less aggro approach. He was going through heartbreak and stuff like that, so he was writing those types of songs. And as much as that stuff might be going on in my life, we don’t need more of that on this record. I missed what Eric brought to the band, which was a little bit of chaos. I have that in me, so I was like, “Let me feature that part of my weird personality, just so that it stays in the band and maintain that spirit.” To some degree, I make sure the songs aren’t wildly insane. Well, I don’t know if that’s true, because that last record I put a few songs on there that don’t sound like Sebadoh songs at all to me. I try to just not do the same thing Lou is doing. And it is kind of on purpose.

CB: How do you guys go about crafting a setlist with so many songs from which to choose?

JL: I want to cater to people who have come to hear certain things, who want something out of the experience, so I do try to play hits, so to speak. There are a handful of songs of mine that I know people want to hear almost every time we play. I just want to make sure there’s a good mix. I know how I feel when I go see a band that I’ve known for a really long time. For me, as a fan, to reverse it I would cite Mission of Burma, somebody who has been around a wicked long time and I’m completely enamored of their work and they’ve had a very creative late-career output. So when I go to see Mission of Burma play, I’m very excited about the new music but, of course, the familiar tunes just make you jump through the roof.

CB: How has touring changed over the years? Do you notice anything particularly different from the early days?

JL: In this age of streaming, I think in general people think records should be free, but they will pay for live shows. People are charging a ton of money for (concert) tickets nowadays, in my opinion. For us, it’s a return to the early days of just scrapping away. We don’t make a ton of money from the shows because we’re not a big band, and so we just have to stay in the minivan, which we prefer anyway. (Laughs.) It’s not a great business to be in if you want to make a living, and so it’s very much the same as it was 30 years ago. It’s good. It keeps things pure in a certain sense because things on our level… you’re not going to be corrupted by greed because there is no greed to be had. In a way it’s a self-governing mechanism.

CB: You guys aren’t known for your social or political commentary, but “Raging River” seems pretty overt in its critique of this crazy moment. How did that come about?

JL: As an old Punk rocker, Jello Biafra and other politically-minded musicians taught me a lot about what to be suspicious of in the world and our government. So that’s always been in the back of my mind, that sort of activist side. Being interested in social and political issues is just human, but bringing it into a band where we mostly talk about human relationships — almost all of our songs are about my friend being a dick or I’m having trouble with my girlfriend — to force politics in there would have been a little awkward. But I think it was just naturally the way that I was feeling when we were putting these songs together. It was just coming out of me, you know? I’m scared — or not necessarily scared but no one seems to know what’s up right now, me included. I just wanted to raise my hand and be counted.