Indigo Girls will be promoting their 16th studio album, "Look Long," which ventures into their personal upbringings and the origins of their musical careers. 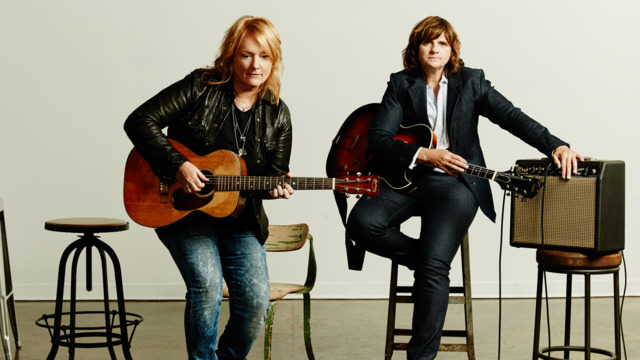 Photo: provided
Emily Saliers and Amy Ray of Indigo Girls will be in Huber Heights in September.

Amy Ray and Emily Saliers' influential Folk Rock duo will hit the Dayton-area amphitheater on September 1 for the first time in their 32-year career. The longtime friends will be promoting their 16th studio album, Look Long, which ventures into their personal upbringings and the origins of their musical careers. Tickets will be available to the public at 11 a.m. July 1 at ticketmaster.com and rosemusiccenter.com.

“We’re fallible creatures shaped by the physics of life,” Saliers says in a press release. “We’re shaped by our past; what makes us who we are? And why?”

The release describes the new album as follows:

Produced by John Reynolds (Sinéad O’Connor, Damien Dempsey) and recorded in the countryside outside Bath, England at Peter Gabriel’s Real World Studios, these eleven songs have a tender, revealing motion to them, as if they’re feeding into a Super 8 film projector, illuminating a darkened living room. “When We Were Writers” recounts the flying sparks and passion Saliers felt as a young college student when the duo first started performing together. “Shit Kickin’” is a nuanced love letter to Ray’s Southern heritage.

The 33-date tour kicks off August 12 in Saratoga, California before hitting the Midwest in September. After Indigo Girls' September 1 date in Huber Heights, the duo will head to Grand Rapids, Michigan; Cleveland Heights, Ohio; and back this way to Louisville, Kentucky.

Though this will be the duo's first stop at Rose Music Center, Ray and Saliers are no strangers to Greater Cincinnati. In recent years, they've performed at the Taft Theatre and Madison Theatre, among other local venues. They also performed a notable, well-received show in 2018 with the Cincinnati Pops Orchestra at Cincinnati Music Hall.

Indigo Girls formed near Decatur, Georgia, in the 1980s and soon became part of a major wave of female singer-songwriter acts. Their self-titled major-label debut album included the hit "Closer to Fine" and featured members of R.E.M. on several songs.

Ray and Saliers are also icons of the LGBTQ+ community and have been longtime high-profile, vocal supporters of many causes and organizations over the years.

Below, watch Indigo Girls and guests Michael Stipe, Natalie Merchant and Woody Harrelson perform the Youngbloods' "Get Together" during an Earth Day rally in 1990.