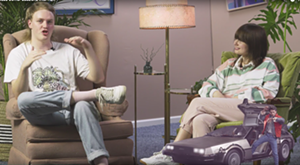 The duo, made up of Christian Gough and Claire Muenchen, performed “Complicated” from their new self-titled album, which gets a local release this Friday when the band plays Woodward Theater. The album comes out nationwide in early September on Old Flame Records. (Inhailer is sponsoring Friday's release party.)

After a brief intro of ambient warm-up sounds and nostalgia-inducing animated graphics (created by Joe Walsh), the music begins. Combined with the duo's fashion sensibilities and the synth-heavy, wavy, pastel-dusted track (which recalls bands like New Order and The Cure), the backdrop helps further cement the ’80s vibe. It makes ya want to ride your bike around an unassuming suburban block knee-deep in heartbreak while the rest of the world spins on.

The videographer, Matt Stalf, set up his Northside studio in About Space to fit the band’s vibe. Vaporwave-esque paintings hang in the background. In the corner, a funky lampshade nearly blends in with the pastel salmon-colored walls. Also helping to set the mood: shag carpet, leafy palm plants and vintage furniture.

Check out "Complicated" below, then click here to watch the interview segment.

“They painted the walls, hauled a huge carpet up multiple flights of stairs and brought in vintage and thrifted furniture to really complete the vibe. It was a lot of work for all involved and so, so worth it,” Srouji says via email. “We are really proud of how things turned out.”

Inhailer came to be after the loss of WNKU, which was sold by Northern Kentucky University to a bible broadcasting corporation and went off the air last fall. Still young, Inhailer continues to work hard to help fill that void. The ability to create a video series like Corner Sessions is something for which Srouji says Inhailer is grateful. Given that it's an online independent radio station, those working with Inhailer are happy to have maintained a fan base and to be able offer more than just its daily streaming music content, which heavily features music from Greater Cincinnati artists.

“Content like the very lively Corner Sessions is what we feel our listeners/followers deserve for their dedication to our mission,” Srouji says. “It feels so good to watch others get excited about what we have put so much effort into creating.”

Though the next session’s subject is still TBD, Inhailer's ultimate goal is to give a voice to “a variety of talents in the city and beyond.” At this point, Srouji says they’re looking to spotlight bands that lean toward Indie and Alternative Rock and Pop. No matter the genre, however, expect the same approach. Each session will cater to the creative direction of the artist and the “corner” set will be custom built, with the aforementioned Joe Walsh graphics changing to reflect the music, too.

Stream Inhailer Radio at inhailer.com and check 'em out on Facebook for updates. And pick up a CityBeat Wednesday (or check back here later) to read our cover-story feature on Moonbeau.