The acclaimed musician thrilled his Cincinnati fans with a charming, mesmerizing performance 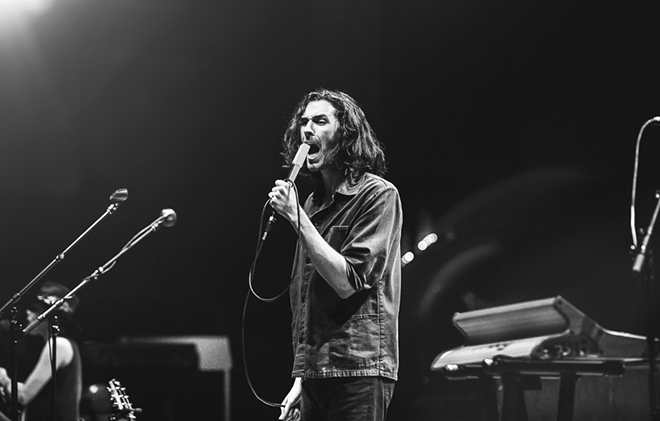 As I entered Taft Theatre on Friday night, I had a wish to hear Andrew Hozier-Byrne’s “Would That I.” My favorite song from his latest album, Wasteland, Baby!, it sits rather deeply buried in the record at the third to last track, and the depth of meaning and volume of its lyrics don’t prop it up to be a typical single. That in mind, I expected it would be tucked away somewhere in the middle of the setlist, if played at all.

After an impactful performance from family band Bailen, the bar was set high for the evening. The twin brothers and sister trio held tight harmonies with earnest lyrics, approaching subjects such as war, mental health and even the simple and honest pain of growing up.

And then, at promptly 9 p.m., Hozier marched out onto the stage and fell immediately into “Would That I,” jumping for joy and awakening the audience, who’d been dutifully sitting in their seats for the previous hour. He enlivened the song with such energy that even he looked startled. It was as if his music was running faster than him, and in the excitement of the show beginning, he had to scramble to chase it.

He was rather unconcerned with catching the words as they entered the verse, but more enthralled with the presence of his audience. He wore perfectly the gangly, awkward, lanky demeanor for which he’s known, offering a goofy chuckle and awed response to the communal music gathering we were all entering together.

Properly aligned with the feeling of family he brought to the atmosphere was his initial comment after “Dinner & Diatribes” and “Nina Cried Power.” After thanking the audience who had flooded the aisles by this point, he expressed his appreciation that we disregarded the “default suggestion” of assigned seating at the Taft, encouraging us to do whatever we wanted.

The concert entered a bluesy, groovy mood with a revamped rendition of “Someone New” and a few more upbeat tunes from both his debut and newer albums. My friend Abby and I hit a personal high when our song, “Nobody,” started off with a twinkle-y, whispery tone and then broke into its original, recognizable form.

Noteworthy about the concert was that Hozier refrained from performing the songs precisely as heard on the album. Some artists perfect their studio work and bring that same calculated combination of notes to the stage, but he had a tendency of refreshing his songs, even sometimes changing the lyrics or occasionally missing words entirely. It was his fervor and vibrance, however, that made those little imperfections all the more a part of the experience, as if he went on stage thinking, “Let’s just have fun.”

The evening saw a shift in mood when he slowed things down with “From Eden,” a single from his debut album. Two-thousand of us swayed and the air was nostalgic as we chanted the line, “Honey, you’re familiar, like my mirror years ago,” remembering the song we fell in the love with five years before.

Everyone has music that places them back into an emotion or feeling, but Hozier is one artist who has a keen ability to spark memories in people.

“Take Me to Church” takes me to Subway. My summer before senior year of high school, I was nearly ripping my hair out one strand at a time as the new single came on the radio for the 15th time while I was stuck captive making Spicy Italian subs for six hours.

“Jackie and Wilson” and “Someone New” remind me of Alexa, a friend I met in England. Her face would light up every time those tunes came up on our joint playlist, and her warm smile illuminated the room for their duration.

“Cherry Wine” transports me to sitting on a couch with that boy I used to know, playing music together. Those lyrics punched me in the gut that night and have never failed to make me teary-eyed since. Friday’s rendition of “Cherry Wine” was no exception. At the end of the night, after he returned for the regularly scheduled “encore,” his band dissipated momentarily and he stood under a red light, alone with his guitar, and shared the song many had been waiting for.

He encouraged the audience not to hold back if they knew the song and everyone held strong through the verses. Near the end came the line, “I’m all but washed in the tide of her breathing,” and Hozier omitted the word “tide” — almost as if to sense how well the listeners knew his lyrics. When he heard the gap filled, a smile swelled across his face and he stared down at the floor.

And maybe that’s part of Hozier’s charm — his ability to captivate you with lyrics that he uses ever so meticulously and sparingly. I’ve not heard one song of his with a wasted word. And while his debut album is its own shade of touching, Wasteland, Baby! is a far more cohesive piece of art, exhibiting what he described in the concert as “love songs about the end of the world.”

His peculiar ability to be among the most popular current artists and still have the same deep, intimate music he’s so good at producing is also part of what made him such a perfect performer for Taft Theatre: it has the kind of intimate atmosphere designed for Hozier’s live sound.

In reference to the end of the world, his only hope was that the last human act could be something as sweet and delicate as a “squeeze of the hand.” And while we were all packed in our aisles, nothing about the experience felt cramped at all; in fact, it felt freeing.