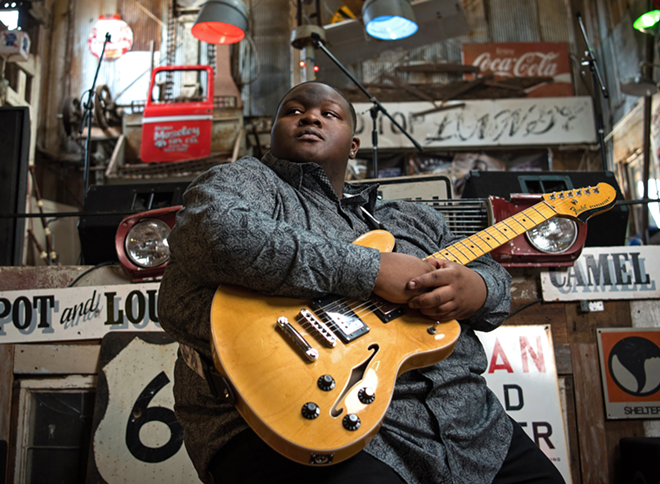 Talk about pressure. When jaw-dropping guitarist Christone “Kingfish” Ingram was just 19, Rolling Stone called him the possible “future of Blues” and compared him to unparalleled guitar gods B.B. King, Jimi Hendrix and Prince.

Ingram certainly has the chops to take on such lofty expectations, concocting a sound fueled by his booming voice and soulful, fiery guitar playing and filled with such vitality it practically jumps from the speakers.

The Clarksdale, Mississippi native (born, spookily, just 10 miles from the famous “crossroads” of Blues lore) has hit a career’s worth of milestones before turning 21, which he did just this past January. He picked up the guitar when he was 11 and within four years he was playing at the White House for Michelle Obama. Signed to the esteemed Blues label Alligator Records, Ingram released his album Kingfish last year to a flood of praise, nabbing a Grammy nomination, five Blues Music Award nominations and a phone-book-sized collection of fawning reviews.

While his music resonates with the rich history of Blues music, Ingram has an eye on taking the music into the future. He says he wants to collaborate with out-of-genre contemporaries like Kendrick Lamar and Thundercat, artists who’ve already found ways to expand on the traditions of Jazz and Funk to keep the music by recontextualizing it for new and future generations to appreciate.

“My core is Blues, but it’s important for me to create a sound and style that is uniquely my own,” the wise-beyond-his-years musician says in a press release. “I have a lot to say, so please stay tuned.”

Ingram’s extensive Fish Grease: A Juke Joint Tour will keep him on the road through the end of November and will be broken up by a string of opening dates with Indie Rock heroes Vampire Weekend.