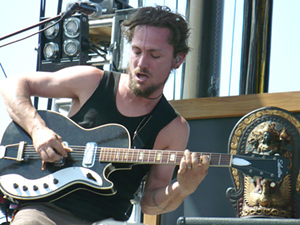 Photo: Scott Dudelson (CC-by-SA 3.0)
John Butler
Australian music superstar John Butler and his Trio will play the big room at Cincinnati's Taft Theatre on Nov. 30 in support of their forthcoming album, +HOME+, which is slated for worldwide release on Sept. 28. Tickets are $28.50-$48.50 and go on sale next Friday (Aug. 10) at 11 a.m.

Butler (born in California to an Australian father and American mother) started out as a busker and with a band called Vitamin in the ’90s. Developing a sound that mixed Rock, Folk, Funk, Blues, Reggae and other styles, he released his debut with the John Butler Trio in the late ’90s; JBT’s sophomore album would go platinum in Australia, and Butler’s next three studio albums debut on the Aussie charts at No. 1. JBT has also won numerous major Australian music awards. In the States, where he also has a large following, Butler’s albums have been distributed by ATO Records, the label co-founded by Dave Matthews.

UPDATE: Now the world has "Home" (the single). Check out the new lyric video: