On Aug. 25, Memorial Hall will host “Celebrate the King: The Gala,” an event honoring the 75th birthday of the pioneering Cincinnati-based record label King Records, one of the most historically important record labels of the 20th century.

In 1943, Cincinnati’s Syd Nathan asked Country artists Grandpa Jones and Merle Travis to go into the studio for those first King sessions. Nathan saw that the Country & Western market was underserved and under-exploited by the music industry. Within a couple of years, Nathan turned to R&B, another type of music the major labels largely ignored.

While also releasing Blues, Jazz, Soul, Gospel and an assortment of other music, Country and R&B music became the legacy of King and its subsidiary labels, not only due to the influence of particular King songs or artists or the wider exposure it gave to the genres, but also because the label’s roster was integrated, a rarity in those pre-Civil Rights times. King Records was home to landmark releases by The Delmore Brothers, The Stanley Brothers, Cowboy Copas and Wynonie Harris, plus Rock and Roll Hall of Fame artist Hank Ballard & The Midnighters, Freddy King, Little Willie John, The “5” Royales and James Brown.

According to a press release for the event, the Aug. 25 “Gala” (which gets a jumpstart on September’s city-wide “King Records Month” festivities) will “take a look back to remember the inventive talent, the many genres of music created by all different types of artists and musicians from around America creating and leading the charge, in Cincinnati, Ohio.”

The event is being steered by innovative local design house We Have Become Vikings (check out some posters WHBV designed featuring King artists below). A portion of ticket proceeds will be donated to the efforts to revive the former King facilities in the Evanston neighborhood.

Here is the schedule for “Celebrate the King: The Gala”:

*10 p.m. After Party at Memorial Hall with Bryan Dilsizian, Cincy Stories, King Me, Shake It Records, Art Academy of Cincinnati, We Have Become Vikings and many more

Tickets are on sale now here. For more info on “Celebrate the King,” visit thekingcelebration.com. 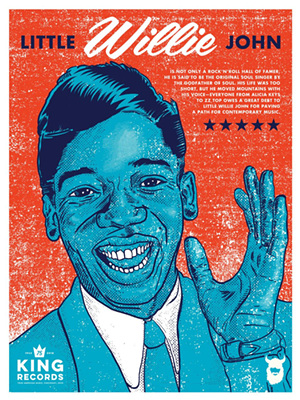