Plus, Yacht gets ripped off by corporate designers and Chris Brown is still a douchebag

If an overeager fan defies security and climbs onto a stage during a Heavy Metal concert, gets pushed off the stage by the band’s singer and eventually dies from the head injuries, should the singer go to jail? Not in the Czech Republic (at least for now). Lamb of God frontman Randy Blythe was facing 10 years in prison after pushing Daniel Nosek from the stage in 2010 (Nosek died two weeks later from his injuries). Blythe recently was acquitted of all charges, though prosecutors say they’ll appeal. While Blythe’s post-acquittal comments made it clear he was happy with the verdict, the singer nobly talked more about the loss of Nosek. In a statement, Blythe said, “I am an innocent man, but a family suffers the loss of a son, a fan of my band. That is what this whole thing is truly about, not prison, not money, not politics, not ME — it is about a young man who lost his life at just 19 years of age.” (Read Rolling Stone's report here.)

When a fan showed up at a San Francisco concert by Indie/ElectroPop group Yacht wearing a “band” shirt the group members had never seen, the musicians thought it was homemade. Then they found out it was actually purchased at the Burlington Coat Factory (not Indie at all!). The shirt was designed by Freeze CMI, which sells clothes through Kohl’s and Burlington, but a rep from the company told Spin she was not aware of Yacht or their distinctive design look (based largely on triangular shapes). The rep said the similarities were “coincidental,” not just another huge corporation co-opting a design because they don’t think anyone will notice.

Compare and contrast (photo from facebook.com/yacht):

How singer Chris Brown still has a career may be today’s biggest showbiz mystery. Instead of lying low and being contrite about his inexcusable attack on girlfriend Rihanna in 2009, Brown doesn’t seem able to stop doing things to make people hate him. His latest fail: Brown reportedly showed off what he’s calling a new “song” recently at an L.A. nightclub. The lyrics include such tender couplets as “Don’t make me have to tell you again, that that’s my pussy baby/It’s mine babe, babe, mine.” That’s a song? Kinda like OJ Simpson writing a novel about a superstar football player who butchers his blonde wife and her waiter friend. For his part, according to Perez Hilton, Brown is backing off his lyrical suggestion. 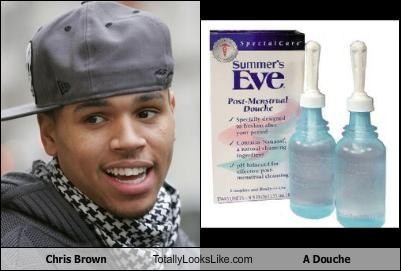