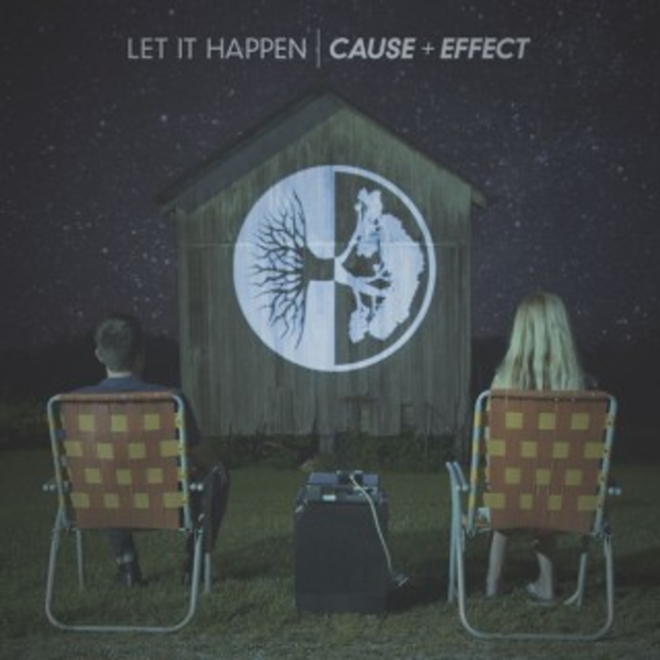 On Tuesday, Cause + Effect, the debut full-length release by Cincinnati rockers Let It Happen, will be released nationally through Northern Ohio-based label, InVogue Records. The band gives local fans first crack at the album Friday at its record release show at Newport, Ky.’s Thompson House (thompsonhousenewport.com). Lamps and Voids and Northbound open the 8 p.m. show. Admission is $10.

With its powerfully memorable melodies, vulnerable lyrics and yearning vocals, Let It Happen would have been immediately tagged (and, by some, dismissed) as a Pop Punk or Emo band a decade ago (and probably will still be by some reviewers), but Cause + Effect is simply a dynamic Pop Rock album executed expertly by a talented foursome. While the band’s sound is familiar (members cite Jimmy Eat World and Relient K as influences, something not hard to figure out after one spin through the LP), the passion and finesse with which it is delivered puts it on a level well beyond most current, like-minded groups and on par with many of the acts that clearly inspire Let It Happen. The crisp production polish and instantly effective hooks make most of Cause + Effect radio-ready, but it never feels like pandering thanks to the emotion poured into seemingly every note played.

The album kicks off with the superb track “Cause,” which begins with a rising swell of ethereal sounds before kicking into a relentless array of punchy, driving rhythms and riffs, while the second part of the album’s one-two opening punch, “Burst and Bloom,” keeps the energy level set to high with some of the recording’s catchiest melodies (which is saying a lot, because Cause + Effect is overflowing with ear-grabbing moments).

But even within these rockers are clever tangents and dynamics that show that Let It Happen has a lot more going on than the usual Fall Out Boy come lately. There is a lot of drive in album highlight “The Lonely One,” for example, but the song is loaded with stops and starts and loud/quiet shifts. The creative arrangements boost the effectiveness of the songwriting, sucking the listener in even more.

Another highlight moment is “Astray,” a slower-paced, more subdued (but no less potent) track that starts with some airy keyboards, gently strummed guitar and plaintive vocals before the halfway mark, when the big beat kicks in, accompanied by spacious guitar leads and great harmony vocals. The album-ending “Effect” pulls everything together for a satisfying close, seemingly combining every aspect that makes Cause + Effect so endearing into one track.

With great songwriting and arrangements, a dexterous, airtight rhythm section, crafty guitar interplay and a steady stream of irrepressible hooks, Cause + Effect is an impossibly strong debut album and one that should increase national attention for Let It Happen. It’s ace Pop Rock with depth and heart. (letithappenband.com)

Volume One – The Maze is the first official release from Royal Holland, the pseudonym/current project of Cincinnati singer/songwriter Matt Mooney, former frontman of late local Indie Rock band Koala Fires. The EP is available now at royalholland.bandcamp.com and will be celebrated with a free, 9 p.m. release party Thursday at Northside Tavern (northside-tavern.com). State Song and umin also perform.

The EP is a compelling introduction to Royal Holland’s unique sound, a mix of acoustic guitar, enchanting melodies and harmonies, rolling live drums and danceable drum-machine beats, electronic additives and, at its essence, spectacular songwriting. The music is self-described as “dreamy synth folk,” which is as good of a description as any, though it may conjure up images of Bob Dylan fronting Erasure, something it definitely doesn’t resemble.

Instead, the writing is more akin to Royal Holland’s avowed “heroes” like Jeff Mangum, Neil Young and Leonard Cohen, occasionally using some classic Folk music attributes but never becoming beholden to any genre’s limitations. The “synth” elements manifest themselves in tasteful electronic adornment that is subtle and never distracting from the songwriting’s impact. The EP’s five songs would all stand by themselves magnificently, but the light ornamentation gives Royal Holland’s approach an airy swirl of intrigue.

The fantastic lyrics also take Volume One – The Maze to another level. Just as the songs would stand tall delivered with just a guitar and vocals, the words are pure poetry, even separate from the music. “I’ve been sleeping all day/Trying to dream up some kind of way/That my arms could grow around you like a tree/Steady and strong/As the years tack worries on/You could lay them all on me/As my limbs creak in the breeze/The leaves would fall like silver in your hair” from EP closer “Twin Rivers” (featuring ex-Seedy Seed Margaret Darling on harmony vocals and accordion) is just one example of the EP’s exceptional lyrical content.

Following the EP release show, Royal Holland will pick up his already busy touring schedule, with plans to release two more EPs early next year (to be compiled on vinyl for a later release) and then a full-length album. (royalhollandsongs.com)