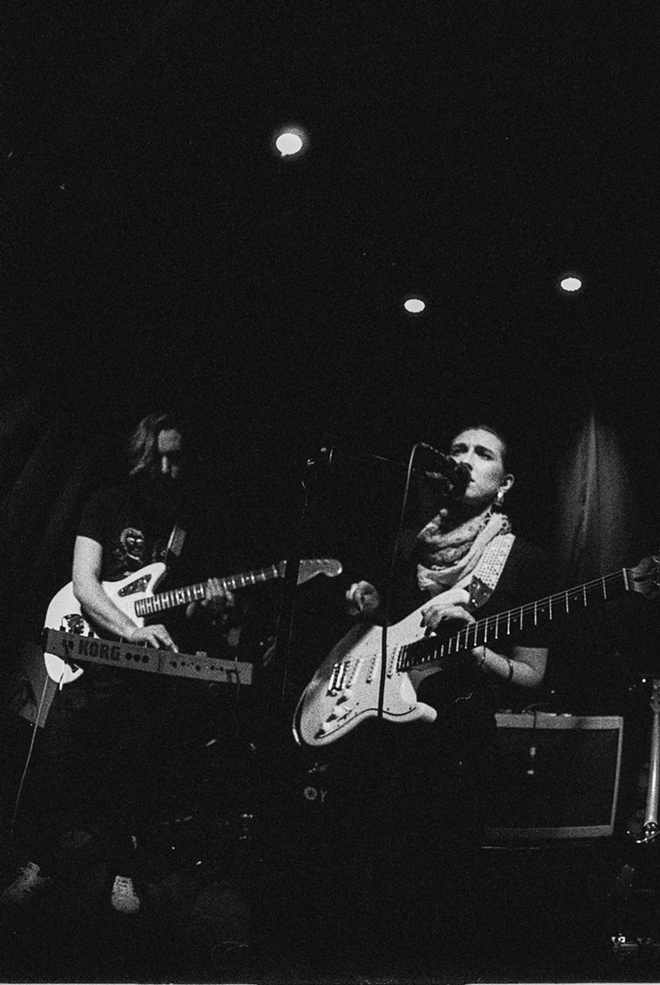 A droning meditation, held together by tight-knight threads of tension, MARR’s debut single Gills/Posture is a waterbed fit to burst, its liturgical synth chords undulating under the weight of Maggie Cleary’s swollen vowel sounds.

The two-track effort is a surprisingly focused whole: it’s the sum of a quartet whose musical inspirations couldn’t be more disparate. Cleary, who handles lead vocals and guitar, hones her songcraft on singer/songwriter fare, while bassist Mike Huhn works to blend the complex technicality of his background in Metal bands with Shoegaze’s more skeletal rhythms. Drummer Tony Squeri even factors some Industrial Techno into the equation — his personal Soundcloud features a sampler of lurching dance cuts that recall Factory Floor or Andy Stott.

MARR formed in 2016 when Cleary and Squeri — former UC/DAAP dorm neighbors — met at a party, post-graduation.

“I asked him, ‘Hey, want to help me record some of my stuff?’ and he was like, ‘sure,’ ” Cleary says. “Once we had done that, we here just like, ‘Can we just write music together?’”

The band’s current lineup began to take shape after the pair began to collaborate. Squeri’s roommate, Tim Koppenhafer, working on his thesis at the time, was enlisted as a member and graphic designer as a reprieve from his strenuous workload. Huhn joined the fray after the band booked its first show, still in search of someone to play bass.

Despite all evidence, including a copy of Johnny Marr’s autobiography Set the Boy Free, which Huhn had on hand, MARR is not named after the famed Smiths guitarist. It’s Cleary’s mother’s nickname, which was the winning suggestion in a band-name brainstorming session.

Their band’s early efforts birthed a handful of demos now housed in a neatly-packaged Bandcamp EP. A flock of cut-and-pasted penguins crowd its cover, interrupted by MARR’s name printed in a Chillwave-y gradient. “Hey Glitter” is the choicest cut of the collection, sprinkling sun-bleached guitar riffs into a squawking Synth Pop soundscape. There are shades of Fleetwood Mac’s late ’80s foray into New Wave here, hiding in the track’s tropical humidity.

In the near future, MARR hopes to finish an EP that reflects the sound of its live set, shearing the demos’ controlled chaos for the subdued dreaminess hinted at in “Gills.” Though they’ve managed to eliminate the Logic backing tracks that performing the original demos required, MARR’s setup still sprawls across the stage, including a few keyboards that are used in just one song apiece.

“We have more gear than we know what to do with,” jokes Koppenhafer.