Through his music, Tyler Harmon tackles his personal struggles and tries to help young listeners. 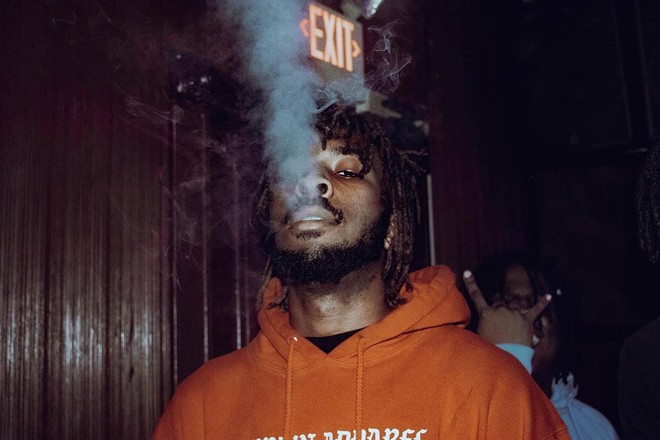 Hip-hop is at its best when it is raw, honest, and absolutely refuses to be ignored. Cincinnati artist TOKYO DANIELS! (stylized by the artist in all caps but published as Tokyo Daniels! from here forward)  has only been active since the summer of 2020 but already has an album, EP and several singles under his belt. Found within these releases are the words of a young man who has dealt with love, loss, personal demons, and a “dark cloud” hanging over his hometown head- on.

For his latest release Love, Drugs, and Guitar, Tokyo Daniels! – real name Tyler Harmon – has decided to once again tackle his personal struggles, set to the sounds of his childhood with the same lyrical forthrightness found in the best of his peers. But Harmon isn’t just satisfied with simply pointing out the struggles surrounding and within him; he’s taken it upon himself to help heal the city he loves so much and do whatever he can to remove the cloud he often has had to deal with himself.

CityBeat: Why do you feel it’s so important to work your hometown into your lyrics?
Harmon: Those are your roots, you know what I’m saying? That’s where you come from and at the end of the day, people are going to want to know what it is that you come from, where it is that you come from, so I feel like it’s important that we claim our cities. And I don’t feel like you should tie yourself down to your city and pigeonhole yourself like that but at the same time, I feel like it’s very important that you know exactly who you are and why you are the way you are. So that’s why I work a lot of Cincinnati references into my music, so people can connect with me on that level.

CityBeat: What prompted you to start writing and recording?
Harmon: What basically kickstarted me was the death of my grandmother; she was basically my second mother. And then after that, I had a suicide scare where I tried to commit suicide and my ex-girlfriend caught me. And then from there, I decided I needed a better outlet for my emotions. From that point, I just started writing. I’ve written poetry my entire life, so from that point I started writing even more poetry and eventually someone – my friend Jonna – came up to me and said, "You should really start making music because your poetry really reminds me of a rapper," so I started making music and people started to like it and gravitate towards it.

CityBeat: Tell us more about your next upcoming releases.
Harmon: In November, I have an EP coming out and, in the summer of 2023, I’ll be releasing a full album called Delinquent 3. That EP is called Love, Drugs, and Guitars, and it’s basically going to be talking about my battles with drug addiction, my love life, and it’s all centered around the sound of the guitar because one of the most common sounds I heard when I was growing up was the guitar because my dad was huge into Jazz and guitar music. The whole process behind it was to do something different but still keep that factor of authenticity within it and be very direct with what I’m saying.

CityBeat: What’s next for Tokyo Daniels!?
Harmon: [I want to] have community impact. I want to talk to the youth a little bit, get into the scene, get into the community and try to take this dark cloud off of this city. There’s a lot people who believe that Cincinnati has a dark cloud over it, that people just don’t get out of Cincinnati, people get stuck in their situations. So, I want to remove that, help people get out of their situations, help the youth find their way. Because there’s a lot of youth right now that are stuck in the streets, selling drugs, their parents are on drugs, they come home [and] they have no one at home, there’s no food in the house. My biggest thing is I need to make it in this so I can help relieve some of that.

Delinquent 2 and other work by Tokyo Daniels! is available on Spotify now, with Love, Drugs, and Guitar scheduled for release soon. The artist plans to book shows beginning later this month.