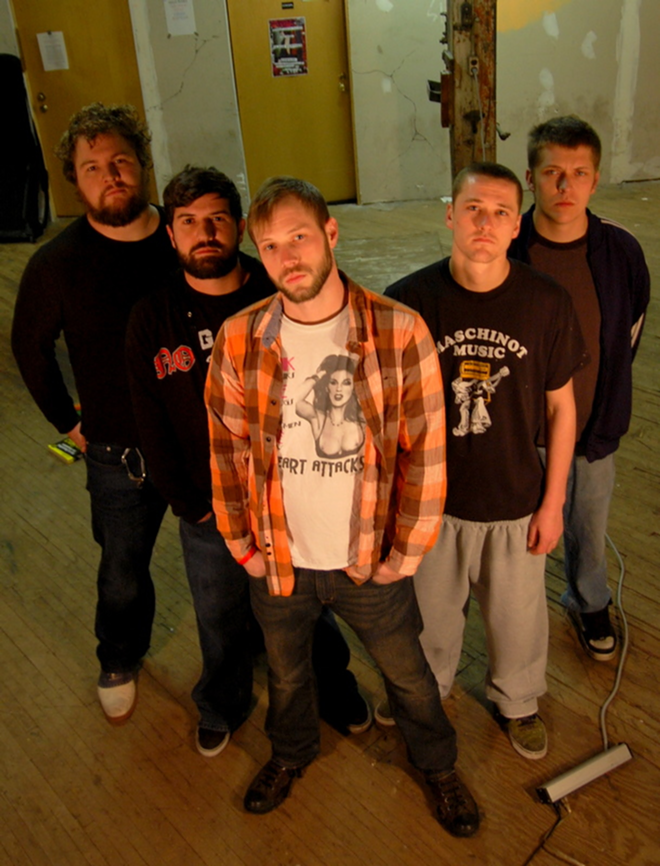 One of Cincy’s more popular Punk/Pop bands has decided to call it quits. But first, they’ll give fans some new music and one final blow-out show to remember them by.

has played well-attended gigs regularly around town for the past half decade or so, eventually becoming headliners of self-booked multi-band shows at places like Madison Theater in Covington. This Friday, the group returns to the club for its farewell show and the release party for its final album, the eight-song Future Boredom .

The band is splitting because guitarist Mike

When asked via email about their favorite memories as a band, Ulanski wrote, “

We’ve been fortunate enough to share a stage with just about every one of the bands we grew up idolizing, but opening for NOFX takes the cake on moments that we’ll remember forever. The proud moment there was that the 2,000 people crammed into the Madison Theater didn’t boo us off the stage like NOFX crowds are prone to do. But besides that, we have a lot to be proud of, and more importantly a lot to be thankful for.”

, Horsecop , Situation Red and The Milky Way Persuasion . Tickets are $5. Visit www.loudestmouth.com for more on the group.

is a great reason for a roadtrip through Boone County, about 40 minutes southwest of Cincinnati.

(Warsaw Falcons, 500 Miles to Memphis), who started the event three years ago as a way to raise money for WNKU as a “thank you” for the Northern Kentucky radio outlet’s ceaseless support of not only quality music on the FM radio dial, but also many local artists.

The name of the fest is taken from the title of Brown’s last solo album, Browngrass & Wildflowers (some proceeds from which also went to WNKU) and DRB will release his brand new recording, Kentucky Dinosaur, in conjunction with this weekend’s fest. They’ll be given away free with the first 1,000 paid admissions to the event ($15).

BrownGrass 2012 takes place Saturday along the riverbank in Rabbit Hash and features a stellar lineup of local, regional and national acts, including DRB and his BrownGrass Band

, The Tadcasters , Magnolia Mountain , The Leo Clarke Band , Greg Schramm & the Radio King Cowboys , Kelly Thomas & the Fabulous Pickups , Beth Farmer , Davey O , Dan F. Hill and many others. Blame Bertsch , a strong new duo that just released a quality debut album, is also on the bill (give a listen at www.blamebertsch.com ), as well as Mack West , the great local Indie Western band that recently issued its new single, “The Rapture,” featuring the “B-side” “Vigilante’s Prayer.” Both tracks are available for free via mackwest.bandcamp.com .

The BrownGrass fest runs from noon-11 p.m. For complete details on the BrownGrass Festival 2012, visit browngrassfestival.com.

• The Cincy Blues Fest is just three weeks away (Aug. 10-11 at Sawyer Point), but you can get an early taste of some of the local Blues scene’s best this Saturday at Stanley’s Pub as the Columbia-Tusculum club hosts a “Blues & BBQ

• If you’re more into Rock, but still want that “tons of bands on one show” experience, head to Covington’s Madison Theater Saturday to witness the “New Noise Showcase

,” a “celebration of Cincinnati’s best new bands” concert presented by The Counter Rhythm Group, Madison Theater and cincyticket.com. This Saturday’s showcase focuses on area Indie/Alternative bands and features Public (formerly Crown), The Grey Academy (featuring ex-members of Ellison), The Yugos , Fun Machine , Canoes , Archer’s Paradox , Come Here Watson and Department Store Alligators . Advanced tickets are $8; they’ll be $10 at the door. The all-ages show kicks off at 7:30 p.m. and there will be door prizes raffled off all night (including free entry to all Madison Theater shows for an entire year). CONTACT MIKE BREEN : [email protected] or on Twitter (@CityBeatMusic)