Bourbon lovers, foodies and Classic Rock and Bluegrass fans will find heaven in Kentucky this summer at the event dubbed the “World’s Largest Bourbon Festival”

The lineup has been announced for this year’s Bourbon & Beyond festival, which is returning Sept. 22-23 to Louisville, Ky.’s Champions Park. The music lineup for this year’s event is like the playlist for a Classic Rock radio station, with Robert Plant and The Sensational Space Shifters, Sting, Lenny Kravitz and David Byrne among the acts topping the bill. 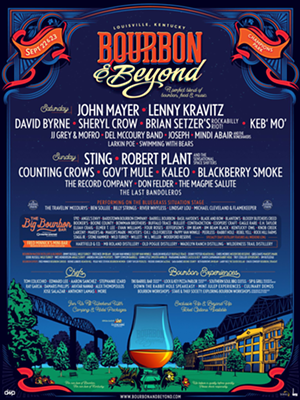 Described as “the world’s largest bourbon festival,” the inaugural festival last year drew around 50,000 attendees. On the bourbon side, there will be a vast variety on hand to sample, from vintage bourbons dating back to the ’30s and two dozen bourbons selected by “bourbon curator” Fred Minnick to a range of craft bourbon selections.

The food component of this year's Bourbon & Beyond looks strong, as well. The food demonstrations and presentations will be “headlined” by Tom Colicchio, head judge on Top Chef, which is filming its 16th season in Louisville.

Here’s the rest of the foodie superstars scheduled to appear:

● Akhtar Nawab (Louisville native, Chef/Owner at Alta Calidad in New York City, Fero in Birmingham and Prather’s on the Alley in Washington, D.C.)

● Anthony Lamas (Chef/Owner at Seviche, a Latin Restaurant in Louisville)