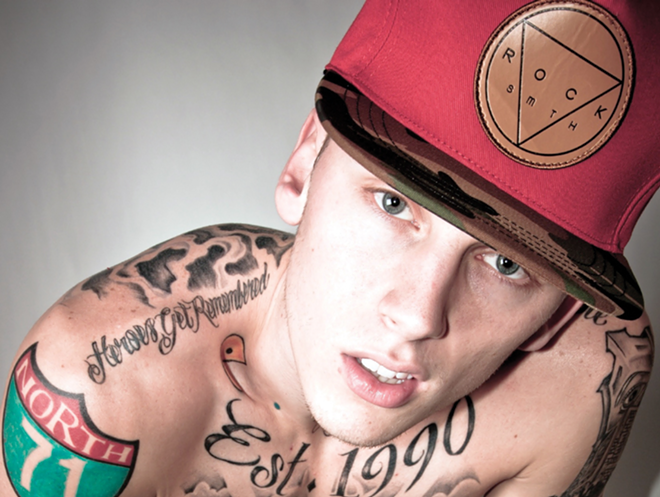 What a difference a few weeks can make in the accelerated pace of the new music world. On June 18 this year, when Cleveland rapper Machine Gun Kelly performed a packed, free concert in Cincinnati on Fountain Square, he was one of the biggest unsigned Hip Hop artists on the planet, having amassed a huge underground following via tour appearances, self- and indie-label-released recordings, guest slots on other people’s records and regular play on Cleveland-area radio and at Cavaliers basketball games (his track “Cleveland” became something of a Cavs anthem).

Then, on Aug. 3, MGK was unsigned no more, inking a deal with Jimmy Iovine and Sean P. “Puff Daddy” Diddy Combs for future releases via Interscope/Bad Boy Records. And he made national headlines a couple weeks later after being arrested at a mall in Strongsville, Ohio. Kelly — born Richard Colson Baker — wasn’t busted for weed, carrying a gun or robbing a Lane Bryant store. He was cuffed after organizing a “flash mob” at the mall via Twitter. (Afterwards, he tweeted, “If having fun with my fans means I have to get arrested then keep the cuffs out.”)

That’s not the stuff of typical rapper legend, and MGK’s talents are pretty atypical as well. His independent releases showcased his wicked rapid-fire flow, smart/clever lyrical style and crafty musical backing and track structure. The whole world is gradually becoming hip to the Northern Ohio MC’s talents — in early September he teamed with Waka Flocka for the buzzin’ single “Wild Boy,” while MGK’s Bad Boy debut is currently in the works, reportedly with assistance from Diddy, fellow Clevelander Chip tha Ripper and fellow up-and-comer Travis Porter. The album, to be titled Lace Up, is due in early 2012.