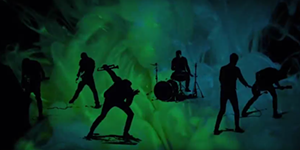 A new band project called Cool Life is set to unveil the music video for its first single, “Waves,” which was released late last year. The track and video feature special guest Eric Nally, the Cincinnati-area native, sidekick of Macklemore and frontman for the on-hiatus Foxy Shazam who’s first solo singles/videos were released last year in advance of a much-anticipated solo EP.

In an email, Walsh-Davis — who describes “Waves” as “a song about unrequited love and the hallucinatory properties of scorpion venom — lays out the long and winding road to Cool Life.

"Cool Life started as leftover guitar riffs I wrote for Cadaver Dogs' Too Much in early 2014. While recording Too Much with Loren Turner from Foxy Shazam, he sold me a Les Paul I had been noodling around on in his studio and I couldn't put it down. That purchase led to most of the Cool Life songs (sans vocals) being written and demoed within a month or two in my basement.

At this point I decided I actually wanted to do something with these songs, and got the other guys involved. Alex Nauth (vox/horns), Sam Duff (bass), and I were in a band called Look Afraid together in college and beyond. Fellow longtime friends and Cincinnati rock veterans Kamal Hiresh (drums) and Chris Harrison (guitar) were dudes I had always wanted to play with. Luckily they were all in, and we started rehearsing and refining the songs shortly thereafter.

During this process I joined Honeyspiders and Alex's band The Skulx formed and recorded their album. We still moved at a slow but steady pace on the Cool Life album. We recorded drums in two sessions with Mark Lienhart at One Louder studio in Cinci in August 2015 and January 2016, recorded guitar and bass at my house, and vocals at Alex's. The stretched out timeline continued, with vocal writing/tracking happening throughout 2016 and  2017. Mixing was done by Mitch Wyatt (another Cinci friend current living in Arizona). We got a ton of guest performers on the record, including Eric Nally, Wilson's Chad Nicefield, Jess Lamb and a bunch more.

The album has been such a trip to make, everybody's lives have changed a lot since we started — for example, by the time the album comes out, Chris, Alex and I will have had our first children (and in my case first and second). But the album has stayed fresh and fun to us the whole time, and we're super proud of the way it turned out.

Because the album was so in-flux and the relative variety of song styles, we wanted the visual aesthetic to be hard to pin down as well, and give away as little as possible about what it would actually sound like. We collaborated with our friend Charlie Compton to create a really big body of visual art for the album/social media

Cool Life’s full album debut is due later this year on Mind Over Matter Records. In the meantime, the “Waves” video — filmed in Dayton, Ohio with Ruef Design — is set to launch this Friday. Visit Cool Life’s Facebook, Instagram and YouTube pages for updates and to watch the video Friday.

“We knew Eric would dig the vibe and he killed his feature,” Walsh-Davis says of Nally’s “Waves” appearance. “It contains the gnarliest recorded scream from him in the last 10 years, in my opinion."

And here's the video clip that introduced the band late last year:

You can get “Waves” in its audio form this Friday on your favorite digital platform.

UPDATE: Check out the full video of "Waves" below.