Band gets massive press coverage after Olympics give Russian contingent their name; "Smashing Pumpkins" announce reunion of 3/4 of their original lineup for big-money nostalgia tour; Marilyn Manson and Morrissey have (shockingly!) pissed off fans 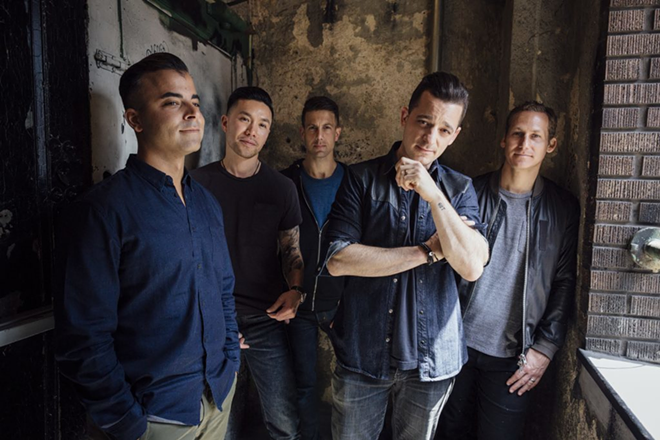 Photo: Josh Goleman
O.A.R. are not Olympic athletes from Russia unable to compete under the country's name due to numerous doping scandals.
HOT: O.A.R. is Not in the Olympics

Rock band O.A.R. have been getting a ton of well-timed publicity from the Winter Olympics. Right after announcing a new album and tour, the band’s initials received attention in Olympic coverage, where “OAR” is used to designate the “Olympic Athletes of Russia,” the games’ weak-ass response to banning Russia after widespread doping by the athletes (it clearly had no effect, as a Russian curler was found using a banned substance recently). After some social media jokes about the coincidence, the band has been contacted for interviews by numerous press outlets and is taking it all with a sense of humor. Though wouldn’t it be more humorous if the musicians were absolutely furious about it? (That O.A.R., by the way, stands for "Of a Revolution.")

After much build-up, “Smashing Pumpkins” announced a “reunion” tour and, yes, trademark drama ensued. Guitarist James Iha is back from the original lineup, but bassist D’arcy Wretzky has been left out. While band statements suggest the door remains open, in interviews, Wretzky blamed William "Billy" Corgan for her absence. She also released alleged text exchanges with Corgan that didn’t exactly support her accusations, with Corgan saying she could participate as much as she wanted. In the texts, Wretzky also asked about Jack Bates (the most recent Pumpkins bassist), but initially thought he was “Jack White” (she’s a “big fan” of The White Stripes, apparently), whom she refers to as “Patty (sic) Smith’s son.”

Marilyn Manson and Morrissey both had some, uh, “uncomfortable” moments at recent shows. Marilyn Manson angered fans attending his Huntington, N.Y. concert after he reportedly rambled incoherently, stopped and started songs and “jammed” for an hour and 15 minutes (refunds weren’t offered). By those standards, Morrissey’s fumble in Glasgow, Scotland a few days later was like Paul Anka getting a tiny blister on his microphone-holding hand, but it was still enough to reportedly cause people to walk out mid-show. The singer asked if anyone actually liked Scottish First Minister Nicola Sturgeon, saying her “hands will be in anybody’s pockets.” Sturgeon has been staunchly against the U.K. leaving the European Union; Morrissey is pro-“Brexit.” Glasgow is a hotbed of support for Scottish independence in the name of remaining in the E.U. (Sturgeon responded and — this may shock Americans — she didn't say Morrissey should just shut up and sing.)