Due in early November, ‘American Originals: 1918’ was recorded at Music Hall last year; watch a pair of live videos from the event now 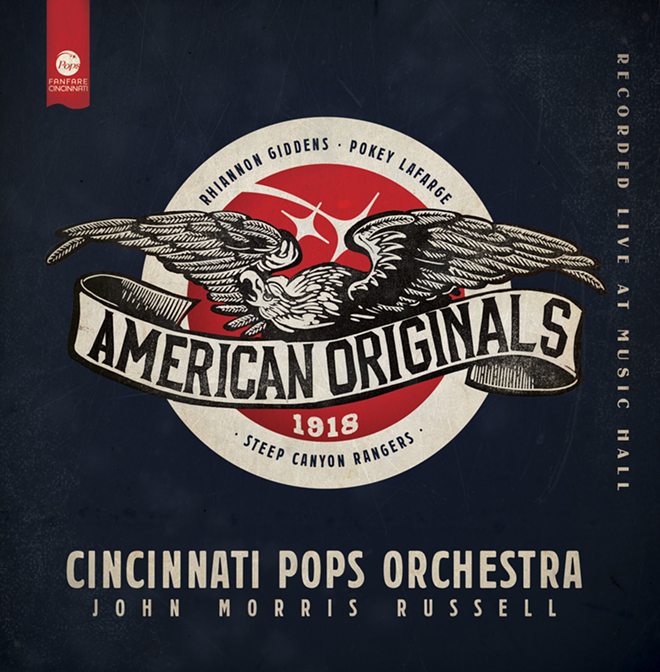 On Nov. 9, the Cincinnati Pops Orchestra will release American Originals: 1918, a collection of material recorded last year at Music Hall, on its own label, Fanfare Cincinnati.

The album is the latest in a series of concerts and releases showcasing the Pops’ arrangements of American Roots music classics from the 19th century through the early 20th century. In early 2015, the first "American Originals" concert celebrated the era and legacy of Stephen Foster, who wrote much of his crucial music in the mid-1800s while living and working in Cincinnati. That concert featured contemporary Americana musicians like Joe Henry, Roseanne Cash, Dom Flemons and Aoife O’Donovan, as well as Cincinnati musical heroes Over the Rhine and the Comet Bluegrass All-Stars.

An album from that concert was released in November of last year, around the same time as the shows that are featured on American Originals: 1918 took place (the Nov. 10-12 concerts were billed as “American Originals: Vol. 2"). As the title suggests, the music from the new album originated around the end of WWI. This time around, current Roots music stars Rhiannon Giddens, Steep Canyon Rangers and Pokey LaFarge collaborated with the Pops on material like Irving Berlin’s “God Bless America” and “Remember,” Bessie Smith’s “I Ain’t Gonna Play No Second Fiddle” and Eubie Blake’s “I’m Just Wild About Harry” (featuring Giddens and tap dancer Robyn Watson).

“At the close of the First World War, and the advent of recording, America’s musical culture played upon the world’s stage for the first time,” Pops Conductor John Morris Russell says in a press release for the album. “The earliest Jazz, Country and Blues styles blossomed across the nation — styles that would bear fruit in American popular music for the remainder of the century and define our shared musical ethos. This post-war era provided the inspiration for American Originals: 1918.”

Below is the full track listing for American Originals: 1918, which will be available on all digital music platforms on Nov. 9. Click here to pre-order the album on CD.

How Ya Gonna Keep ‘Em Down on the Farm?

In the Cause of the Free

I Ain’t Got Nobody