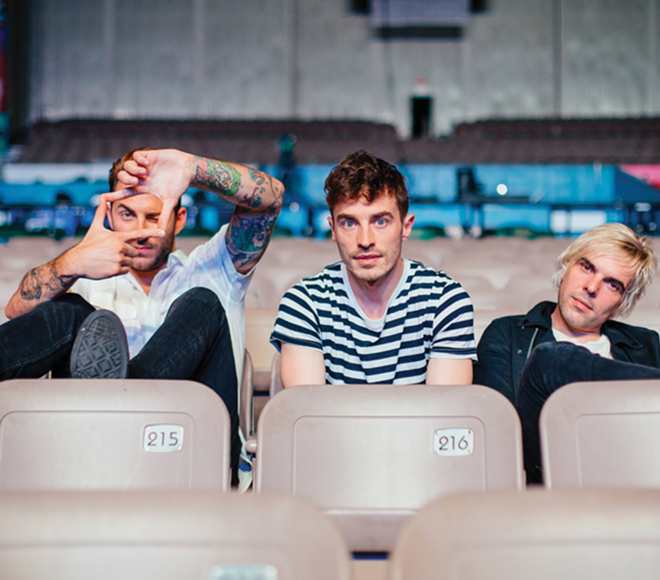 Danish Dance Pop trio New Politics has had an extraordinary year so far, and the seeds they’ve planted in 2014 may come to full fruition early next year when they release Vikings, their much-anticipated third album. If the band’s recent strategy was to get in front of as many faces as possible, it certainly nailed that with a variety of high profile opening slots for the likes of Pink, Panic! at the Disco and Fall Out Boy in 2013, leading to New Politics’ own successful headlining tours this year. The band also did a stint opening for Paramore and Fall Out Boy on this past summer’s Monumentour, which stopped in Cincinnati in July for the Bunbury Festival (founder/organizer Bill Donabedian called them out as one of the band’s he was looking forward to seeing).

New Politics got started eight years ago when songwriters David Boyd and Soren Hansen began collaborating on songs for proposed solo albums. By 2009, the pair had co-written plenty of material and were no closer to recording their albums, so they sent a pair of tunes to a band competition organized by Danish National Radio. Out of nearly 1,000 entrants, New Politics was one of 42 chosen to compete; they had to hire drummer Poul Amaliel in order to play. Before year’s end, New Politics finished in the competition’s top four, played one of Denmark’s major music festivals, signed an RCA contract and relocated to New York City.

The band’s eponymous debut album was released in 2010, and the singles “Yeah Yeah Yeah” and “Dignity” both charted. In 2011, Amaliel left the group and was replaced by Louis Vecchio (the transition took place during a posted video on MTV) and New Politics’ sophomore album, A Bad Girl in Harlem, dropped in 2013, yielding the hits “Harlem” and “Tonight You’re Perfect.”

Just weeks ago, New Politics teased Vikings with the release of their infectious new single “Everywhere I Go (Kings and Queens),” and with some judicious lyric editing for radio (there a lots of f-bombs), it should give Neon Trees a run for their teetering stack of money.

If you’ve had enough of old politics during the midterm elections, maybe you just need some hot New Politics.