The one-of-a-kind venue needs to make $1,000 by Wednesday to stay afloat 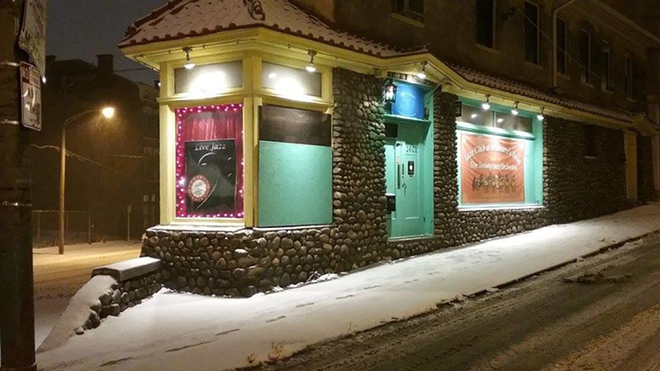 One of the Queen City's best-kept secrets urges folks to, please, spill the beans. According to a Facebook post on May 10, the Jazz club needs to make $1,000 by Wednesday in order to stay in business. 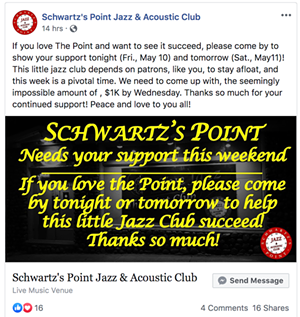 Schwartz’s Point Jazz & Acoustic Club occupies the lower half of the faux-stone and plaster, not-quite-Flatiron building that sits on the north end of the five-way intersection at Vine Street and West McMicken Avenue, just north of Findlay Market. If you’ve driven up Vine from Over-the-Rhine to the area around the University of Cincinnati, you’ve probably seen it.

Though low-key, Schwartz’s Point is everything a Jazz club should be — intimate, warm, funky and comfortable. Schwartz’s Point was designed to emulate the small back-alley Jazz clubs of Paris, clubs where owner and founder Ed Moss (who passed away in 2016) played in his youth. Schwartz’s features a variety of Jazz and is open Thursday through Saturday.

In a 2013 interview with Moss, he called the club and its uniquely triangular listening room “an incredibly hip acoustic situation. There is no bounce and it all works, it doesn’t matter if it’s solo, trio or orchestra. The place is designed for music.”

Moss' daughter Zarleen Watts inherited the club and has poured a lot of time and love into Schwartz's Point and expanded the food offerings on the menu. And in order to keep the legacy of her father and the club he was so deeply passionate about alive, she needs your help.

Grab some friends, pay the $5 cover, buy some (a lot) of drinks and food and support your local Jazz club and music scene. The Andrew Lin Trio with Matt McCoy and Charlie Schefft play from 8:30 p.m.-midnight tonight (May 11).