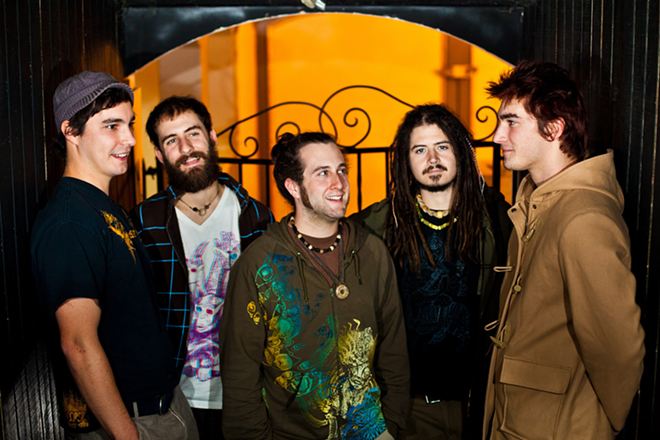 Over the past five years, Papadosio has created a hybrid blend of Pop, Jam, Psychedelia, Fusion and Electronica that synthesizes the interesting elements of each without homogenizing them into an indistinguishable mass. The pinnacle of Papadosio’s musical chemistry process was evidenced by the quintet’s last album, 2009’s Observations, where Synth Pop burbled and blipped in close proximity to stuttering time signatures and loose-limbed drumming, Ambient Electronic textures and full bore Rock excursions into the center of the mind’s all-seeing eye. The band is finishing up work on a double album, slated for release early next year.

Formed in Athens, Ohio, in 2006 and currently based in Asheville, N.C., Papadosio’s road-doggery includes a relentless tour schedule and every appropriate music festival in this hemisphere. Like the majority of their Jam peers, Papadosio endorses live taping for sharing and trading. At last check, the Internet Archive at

had 41 Papadosio gigs available for free download, and there are countless message boards to obtain even more (check YouTube for documentation of the band’s wild light show).

The band is well aware of their carbon footprint on the planet, limiting the number of physical copies pressed of their releases and encouraging fans to download the music. The fivesome (vocalist/guitarist Anthony Thogmartin, vocalist/bassist Rob McConnell, vocalist/keyboardist Sam Brouse, vocalist/synthesist Billy Brouse, drummer Mike Healy) is also actively involved in many charitable pursuits surrounding their live appearances, including food drives. Perhaps most importantly, Papadosio has attracted a fascinating audience of live painters, dancers and other multi-media provocateurs to create an artistic community that accompanies Papadosio with Dead-like dedication around the country.

Thogmartin has stated in interviews that he’d like to see Papadosio become a circus; other than trained animals, a motorcyclist in a steel ball and a tent, they might already be there.