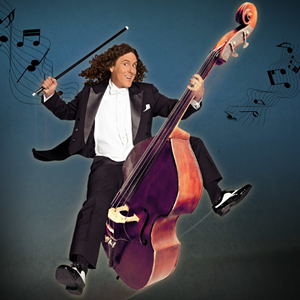 As the tour's title suggests, Yankovic is performing with orchestras on the tour. In a press release, the tour is described as "a high-energy, rock and comedy show featuring costumes, props, a video wall, and — for the first time — a full orchestra."

For the Fraze show, he will be joined by the Dayton Philharmonic Orchestra.

This year, Yankovic's Ridiculously Self-Indulgent, Ill-Advised Vanity Tour was a more stripped down affair and included a rotating setlist that featured deep cuts and non-parody songs never played live before. This time, he's going in a somewhat opposite direction.

“I wanted to follow up my most bare-bones tour ever with my most elaborate and extravagant tour ever," Yankovic said in a press release. "We’re pulling out all the stops for this one.”

Yankovic's most recent contribution to the weirdo pop cultural zeitgeist was his starring role in Weezer's video for their cover of Toto's "Africa."