Singer/guitarist Mariel Beaumont and her group come to Northside Yacht Club for a show on Tuesday, Feb. 19 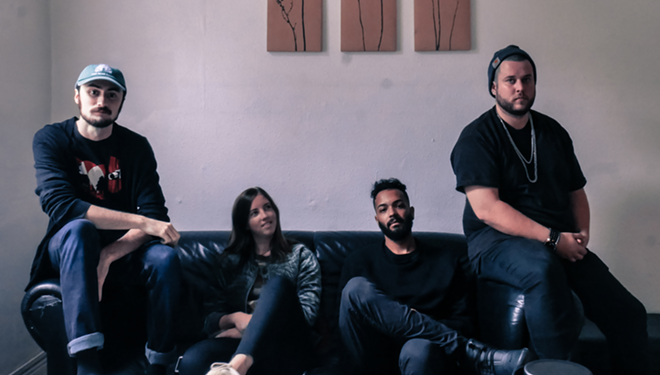 Photo: Joseph Wright
Church Girls
Some of the best Indie Rock of the past five years has shown the enduring influence of women and women-led bands that emerged in the ’90s. After years of being somewhat overlooked, Liz Phair is rightfully now recognized as a treasured Indie Rock icon, her musical legacy being felt in the work of a steady stream of critically-acclaimed artists (including Snail Mail, Soccer Mommy and Speedy Ortiz) who readily admit the huge role Phair played in their development. Elsewhere, listen to any good “New Indie Rock” playlist and it’s impossible to ignore the continued musical presence of The Breeders, The Spinanes, Velocity Girl, Helium, Aimee Mann, Hole, Sleater-Kinney and countless others.

Philadelphia’s Church Girls are another great example of how that music stuck and inspired, though — as with those other artists — the band’s music is distinct enough that it’s hard to tell if the influence is direct or simply absorbed through layers of other inspiration. The band’s singer/guitarist Mariel Beaumont delivers heart-swelling melodies as she and the rest of the group — which currently features drummer Michael Liszka, guitarist Joseph Wright and bassist Vince Vullo — lay down evocative, perfectly-matched Guitar Rock that is enchantingly dynamic and emotive.

Since Beaumont formed the group about half a decade ago, Church Girls has released a handful of EPs and one full-length album (2017’s Hidalgo), all loaded with compelling songs that are “catchy” but not necessarily in a pandering “Pop song” way, instead drawing the ear with unique structuring and arrangements. Listening to Church Girls’ full discography chronologically, you can hear Beaumont’s confidence grow as a writer and performer (she is the sole constant in a lineup that has rotated fairly consistently).

That artistic progression continues with Cycles, Church Girls’ new EP, which stands as the band’s finest piece of work yet. Still rooted in Beaumont’s majestic songwriting, the EP finds the group’s sound developing into something more muscular and focused, leading to more pointed descriptions of Church Girls’ sound as “Post Punk,” rather than “soft Indie Rock” or “Folk Rock” (as some critics tagged them in earlier reviews). Cycles is also powerful lyrically and conceptually, with the songs themed around relationships made complex by substance abuse and addiction — or, as Beaumont explained to mxdwn.com last month, the idea of “the continuity of conflict and forgiveness with someone who has an addiction.”

And though still not traditionally “Pop”-minded, Beaumont offers some incredibly impactful hooks throughout the EP’s five tracks (“Distant Peaks” is a non-stop earworm), making Cycles all the more effective. Though only about 15 minutes long, Cycles makes for a deep and fully engaging listening experience.