Together since the early ’90s, the group is still going strong in the new millennium. Guster plays Covington's Madison Theater on April 11. 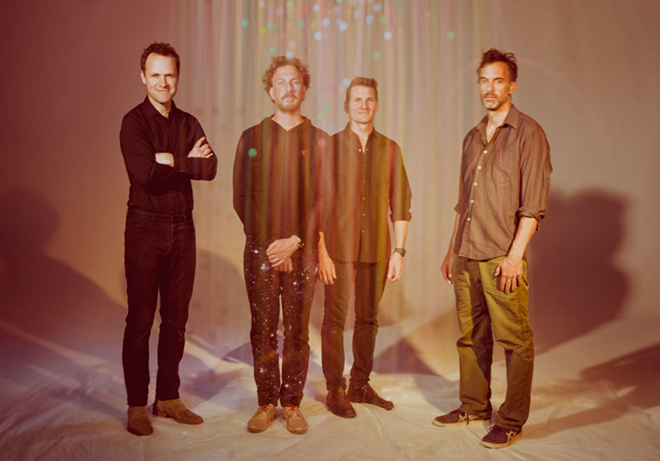 Photo: Alysse Gafkjen
Guster
The cover of Guster’s latest album, Look Alive, features a woman wearing what looks like a cactus hat. It’s a curious choice for a band not known for its prickly nature. In fact, Guster has been one of the most approachable outfits of the last 20-plus years, dropping a series of slanted Pop Rock records flavored with often unexpected instrumentation and good humor.

The Boston-based quartet formed back when the late George H.W. Bush still roamed the White House and when making a living providing songs to TV shows wasn’t the relatively common option it has become (Guster has been especially adept at the practice over the years).

The very next track, “Don’t Go,” is an exuberant blast of frothy Disco Pop with lyrics to match (“I want hippy love/Future sex/5 a.m. French cigarettes”).

The mood shifts again with “Hard Times,” a pensive synth-driven track that seems to tackle the sad state of our political and social discourse (“And send our sisters to the sacrifice/A cruel conviction/Sinister systems keep us satisfied/These are hard times”).

“This record was written against the backdrop of what has been happening in the States for the last couple of years,” Miller said in an interview with Montreal Rocks when Look Alive was released in January. “(It’s) kind of fucked us up in a lot of ways. Ultimately, what I wanted to come through on the record was a sense of optimism. That’s why we called our album Look Alive.”