May 5 • Ballroom at the Taft Theatre 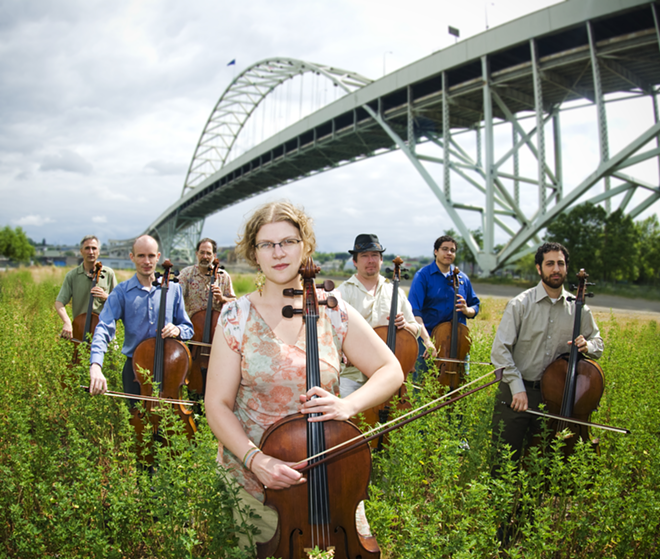 Placing contemporary music in a quasi-Classical setting has been a trendy thing to do since the ’60s, when everyone was trying to squeeze a corollary buck out of Beatlemania. From Walter/Wendy Carlos and Deodato to Philip Glass and Apocalyptica, artists of every creative stripe have approached Classical music from a modern mindset or filtered new music through Classical august instrumentation.

The latter perspective is currently being espoused by the consistently exciting and breathtakingly brilliant Portland Cello Project, which mixes original compositions with powerful baroque Classical rearrangements of slamming Hip Hop tracks. PCP’s new album, the just released Homage, features cover art that leans in the direction of Rousseau while pumping out Mozart-y versions of Lil Wayne’s “She Will,” Kanye West and Jay-Z’s “That’s My Bitch” and Outkast’s smash hit “Hey Ya,” which one might suspect will have you shaking it like a Gainsborough oil portrait.

The rotating septet features cellists from Rock, Jazz, Folk, Electronic and Classical backgrounds finding the coolest common denominators between Bach, Britney Spears and The Dandy Warhols and bringing concert hall precision to a mosh pit boil. The Portland Cello Project has toured with Buckethead and Thao and the Get Down Stay Down, collaborated with Thao and the Warhols and isolated the serious music gene within the most rambunctious Pop/Punk/Hip Hop fan … and vice versa.

PORTLAND CELLO PROJECT performs Saturday, May 5 at the Ballroom at the Taft Theatre with guest Emily Wells. Buy tickets, check out performance times and get venue details here.