The interactive Black Music Walk of Fame at The Banks is slated to open during the 2022 Cincinnati Music Festival.

Photo: Katie Griffith
Bootsy Collins (center) is one of the local musicians to be honored with a star on the Cincinnati Black Music Walk of Fame.

Major pieces of Cincinnati’s unsung Black music history are being spotlighted and celebrated in a permanent way.

Hamilton County Commissioner Alicia Reece is heading successful efforts to install a Black Music Walk of Fame in front of the Andrew J. Brady Music Center downtown, the first four stars of which were revealed in November at their temporary home, the Cincinnati/Northern Kentucky International Airport. Among the inductees are Bootsy Collins, Otis Williams, The Isley Brothers and Charles Fold, who are also recognized as founding members of the Walk of Fame in conjunction with Reece and her team.

“I had heard from a lot of people who were in the industry and were questioning, how can we capture the history of African American artists that are from this area,” Reece tells CityBeat. “And it really sparked me.”

Reece credits her parents' musical nature for her piqued interest and knowledge of rare and lesser-known facts about Black music history in Cincinnati. Her father, Steve Reece, started an independent record label in Cincinnati called S.R. Records in the late ’60s, which recorded his future wife and Alicia Reece’s mother, Barbara Howard’s album On The Rise. The record was granted a reissue in 2019 by local record company Colemine Records. 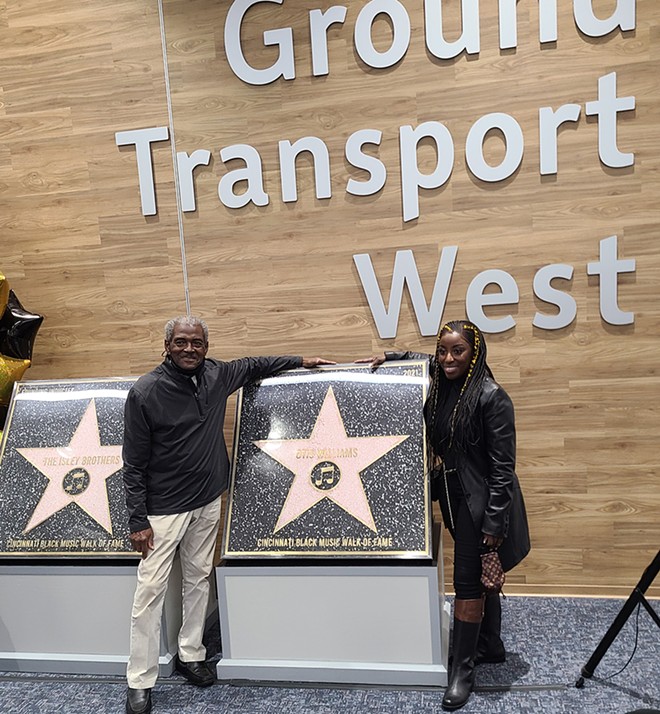 “Growing up, I would hear the stories. (My parents) knew Bootsy and just different stories about different people,” Reece says. “And I said, wow I know these stories but where can I find these stories? So I was really interested in capturing the history of music. And then what really sparked me was that I was at a press conference event with Otis Williams from Otis Williams and The Charms and he pointed over at the (Andrew J. Brady Music Center) — we were at the Freedom Center — and he said, how do we become included, our stories included, and he cried.

"And that’s when I said man, I gotta figure this out because we have this great music venue on The Banks. We have the Paul Brown Stadium that hosts the Cincinnati Music Festival, which is the oldest African American music festival in the country. And we bring all of these artists to town and we have this eyesore on the corner that was just gravel. It just became the missing link that we needed to the puzzle.”

The Walk of Fame’s grand opening is on track to debut during the 2022 Cincinnati Music Festival in July. But the stars honoring the inaugural inductees aren’t intended to be the only attraction. Reece says she’s most excited for the interactive portion of the park, which will include QR codes that lead to to-be-determined avenues of sharing music history and stories.

The interactive storytelling aims to unveil Cincinnati’s rich Black music history and the impact it’s had on music globally. Reece says she particularly enjoys revealing that Prince once recorded a song here in Cincinnati — something most people don’t know — and she was also surprised to learn that Bootsy Collins is responsible for naming superduo Silk Sonic, a new R&B project by Bruno Mars and Anderson .Paak. Collins also gave Kenny Edmonds of The Deele the name Babyface. The Deele was a post-Disco and R&B band that originated in Cincinnati in the ’80s.

Reece envisions videos, livestreams, articles and interviews among other innovative tools as a means to honor inductees specifically while incorporating information on the subject as a whole. That way, even if someone doesn’t have a star, it doesn’t necessarily mean their story won't be included. It was important for the Walk of Fame to evolve into a technology-based encounter, Reece says, to allow for continual updates so visitors can always expect something new.

“I’m excited about the interactive aspect overall, allowing it to be an experience,” she says. “And I’m told that there's nowhere in the country that has anything like this. It is a tourism infrastructure project that will bring people from all over the world to come out and see the music but it also creates a music corridor on The Banks.”

The Cincinnati Music Festival generates Hamilton County’s largest economic impact when it comes to annual events of its kind, Reece says, raking in $107 million on average. The exposure of the grand opening is projected to be major, especially because the festival has been on pandemic-hold for the past two years. For now, the star’s temporary residency at CVG is earning the Black Music Walk of Fame a considerable amount of inceptive attention.

Mindy Kershner, CVG spokesperson, says the airport is looking to see travelers arrive in numbers closer to pre-pandemic times. In 2019, CVG served 9.1 million passengers, Kershner says. The airport is a “front door to our region,” she adds, and says the baggage claim level is a prime spot for the stars, as people have a lot of downtime in this area. They are projecting 75% of that 9.1 million to travel in 2022. With the Walk of Fame living there for about half the year, one could estimate the stars could be exposed to as many as 3 to 4 million airport-goers.

“To be able to have a semi-permanent display where people can learn about music history in our region I think this is the first of its kind,” Kershner says. “I think it's just a good way to tell that larger story of Cincinnati, what we are. About the fact that we are a diverse, inclusive, unique culture or region and we want to be able to portray that to our travelers.”

The sentiment of Black music history being untold or overlooked, and the emphasis on it’s still-lasting importance and impact is echoed throughout the creators of the Black Music Walk of Fame and in a 1993 book titled Going to Cincinnati, A History of Blues in the Queen City by Steven C. Tracy.

An excerpt from the introduction reads: “Of course, the history of Cincinnati’s Blues is not distinguished because it had its odd or outlandish moments. Rather, it is a history of fine and interesting, and sometimes outstanding, performers, recordings, and occasionally record labels that has sadly not been reported in any detail — in fact, rarely mentioned at all — in most accounts of the city. And if many Cincinnatians are not aware of the significant recordings made by performers resident in their city through the years, if they undervalue the contributions of African-Americans living in Cincinnati, they might take some lessons from Blues historians …”

For the future of the permanent, yet ever-changing installment, the Walk of Fame will see one class of inductees each year, and is being constructed to fit a total of 200 stars.

Hamilton County set aside $9 million of its budget for the project, which will be free for visitors.
Scroll to read more Music News articles