The collaborative-minded Chuck Prophet’s latest, Night Surfer, is one of the best albums of his storied career 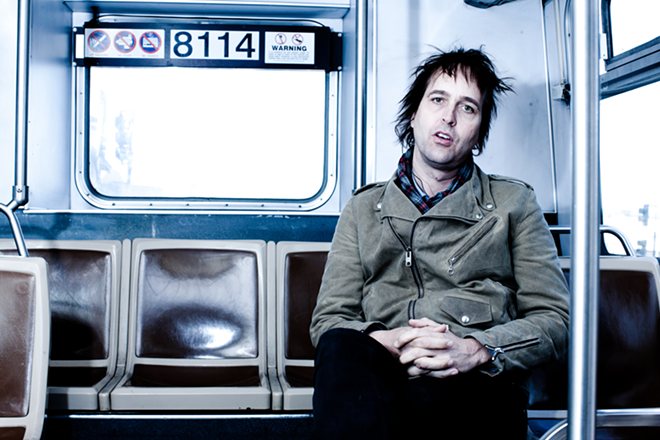 Chuck Prophet is making some of the best music of his career. Jangly, unique and rocking, Prophet’s jams should be reaching a bigger audience. But fickleness and modern tastes don’t always coincide with true creativity that may be lying in the grass like a snake.

Prophet has been in the music business for decades and has experienced the proverbial ups and downs that come with that experience. He’s performed on TV shows like The Late Show with David Letterman. He co-wrote all of the songs on Alejandro Escovedo’s acclaimed 2008 album Real Animal. And, going even farther back, Prophet was in the influential Alt Roots/Folk Rock band Green on Red, which was a leading group in the brief Paisley Underground scene in Los Angeles in the ’80s.

As the years passed, Prophet tried to find his solo niche with varied results. Then in late 2014 he dropped what many consider to be his best album yet, Night Surfer. Appearing on Night Surfer is long-time friend and collaborator Peter Buck of R.E.M., as well as Prairie Prince, drummer for Todd Rundgren and The Tubes back in the day.

Prophet is not only a talented songwriter; his guitar work is bright and inventive and layered, stylistically ranging from Roots to Glam Rock.

“I write songs mostly with the guitar, but sometimes I write with no guitar,” Prophet says. “Sometimes I co-write, looking for a melody. I’ve done everything. I did write a few things on piano for this record, so that was kind of fresh. If the song has got the added bonus of a cool guitar riff that I know I’m going to dig playing, that plays into it. Sometimes you’ll get behind the drums and start beating out a kind of Bo Diddley-Glam Rock beat and say, ‘Let’s do it like this. Give me that riff. Give me that fuckin’ “Jean Jeanie,” Muddy Waters shit there. Ok. Now we’re talking. Let me plug in this vibrato pedal. That’s cool. Let’s stack up the background vocals. Whoa. Yeah. So it will be like “For Your Love.” You stay on that note. It’s like “Cathy’s Clown,” man.’ I mean, that is my language.”

Prophet is old school when it comes to the craft of songwriting, avoiding the overly technical side of music theory and its inherent jargon.

“What (legendary producer, singer and musician) Jim Dickinson and I used to talk about was when somebody would say, ‘Well, you’re going to go four bars and then you’re going to drop down a third, and then you’re going to go up to the tonic note, and you’ll get a little ‘fitzapado’ on the …,’ or some latin words. And Dickinson would be like, ‘Whoa-whoa-whoa! Slow down. Around here we talk in GBUs.’ I was like, ‘What’s a GBU?’ He said, ‘That is Garage Band Units. So, you do this four times, then you go to the other part eight times, and then you go to the …’ There is always that feeling that there is a kind of language, a short hand, for all of this stuff. That is a part of the fun of working with people. I definitely use all of that short hand that I’ve learned.”

Prophet collaborator Prairie Prince’s work as a drummer goes back to his time with The Tubes, an Alt Rock band that existed from the mid-1970s into the 1980s MTV era and featured lead singer Fee Waybill.

Prophet met Buck in California before either had made their mark and they have remained friends to this day.

“I’ve known Peter Buck since I was in high school,” Prophet says. “My high school band opened for R.E.M. in the early days. We were playing at a club in Berkeley and they hadn’t really broken yet, but there was definitely a buzz around them. After our set, I was playing the pinball machine at the Keystone club in Berkeley and Peter Buck walked over to me and he had the Johnny Thunders French cuffs and sleeves spilling out of his jacket, looking like ‘P-Buck.’ That was kind of like the beginning of our relationship.

“Over the years, we might run around and check out guitars or whatever, and then we reconnected over the last few years. I was chatting with Peter one day and I said, ‘What’s going on?’ He said, ‘Man, I’m just up here in Portland waiting for that invitation to come down and play on your record.’ I said, ‘Well, come on down. Wait no longer.’ ”