Psychodots, A Cincinnati Rock & Roll Institution, Are Calling It Quits

The veteran trio will play one final show on Nov. 23 at the Woodward Theater 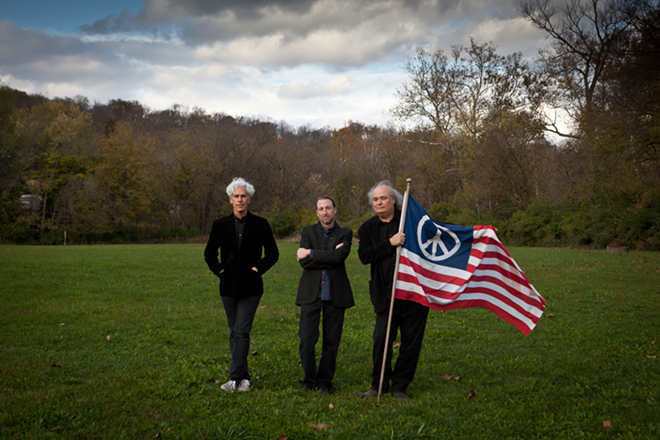 Sublimely melodic Cincinnati Rock legends psychodots have decided to call it quits. The trio’s Thanksgiving show (a ’dots tradition) on Nov. 23 at Woodward Theater will be the band’s final performance, according to singer/guitarist Rob Fetters. (As of now, tickets are still available; click here for details.)

Though over the past several years the annual Thanksgiving-time shows were essentially the only time the three psychodots — Fetters, singer/bassist Bob Nyswonger and singer/drummer Chris Arduser — would perform together publicly, the Nov. 23 swan-song appearance certainly marks the end of an era. While the three musicians have individually had a big and influential presence in the Greater Cincinnati music scene, together their legacy spans five decades. (Read the story of their meeting in Northern Ohio, as told by Nyswonger, here.)

When I contacted Fetters to ask if Nov. 23 was really the band’s final bow, I mentioned how I thought perhaps the “FINAL” verbiage of the billing was a joke, like the long-running “666th Thanksgiving Show” tagline they’d been using for the past decade or so to promote the gigs.

“As far as I can see, it is the last dots gig — I wouldn't kid about something like that,” Fetters replied in an email. “We want people to know so they get a shot at seeing us in good form at a nice venue.”

Arduser, Nyswonger and Fetters first met while attending high school in Toledo, Ohio. The trio has played together, off and on, since the early 1970s, beginning in a group called Legs in 1972; not long after that, Nyswonger and Fetters “shanghaied Chris out of Sylvania High School” (according to Nyswonger’s account) and hit the road with “The Raisins Band.” After moving to Cincinnati, the musicians had made a name for themselves as The Raisins by the late ’70s. Though Arduser was the band’s original drummer, Bam Powell — who is billed as the support act for the Woodward Theater show — was the “classic lineup” drummer who played on the group’s classic 1983 self-titled album, which spawned the huge regional hit “Fear is Never Boring.”

When The Raisins broke up in 1985, the album’s producer, Adrian Belew, teamed up with Arduser, Nyswonger and Fetters to form The Bears. The group signed with a subsidiary of I.R.S. Records and recorded two albums, The Bears and Rise And Shine, touring extensively behind each. The Bears — who were inducted into the Cincinnati Entertainment Awards Hall of Fame in 1997 — reunited a few times over the subsequent years, releasing Car Caught Fire in 2001 and Eureka! in 2007.

After The Bears disbanded, Fetters, Arduser and Nyswonger began playing around town again, becoming “psychodots” with the release of their self-titled album in 1991. The musicians continued to collaborate with Belew sporadically; for the tour behind Belew’s 1994 solo album Here, the trio backed Belew up and also opened dates as psychodots.

The last psychodots album was 2005’s Terminal Blvd. Arduser and Nyswonger have continued to perform in various bands locally, while Fetters (who runs his own commercial music company/studio and has produced music for artists like the acclaimed Cincinnati duo Dawg Yawp) has been playing solo shows on the “house concert” circuit (all three have done solo albums). But they’d always team back up every year for a little extra holiday shopping money and, of course, to give their die-hard local fanbase a special Christmas treat.

Fetters is vague when asked why psychodots decided to cease even once-a-year operations at this point in their partnership.

“All I can say is the situation in the band is too complicated for me to understand — much less describe,” he said. “We decided to not move forward but wanted to play one more time while we're in good form and let our beloved fans know so they wouldn't miss it.”