The local Pop Rock trio's latest EP is the most accomplished and ready-for-primetime yet for a band that has been major-label worthy since it came out of the gate. 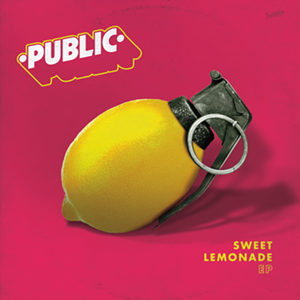 Since forming near the beginning of the decade, Cincinnati Pop Rock trio PUBLIC has been on a gradual upward trajectory, opening shows for the likes of Walk the Moon and Young the Giant, playing festivals like Bunbury and Forecastle, releasing a steady stream of increasingly finessed, radio-ready songs and EPs and amassing an adoring fanbase and growing industry attention with every step.

On June 24, PUBLIC hit a new plateau when it played its biggest show yet, performing a well-received opening set for Columbus, Ohio’s Twenty One Pilots during the hit-making duo’s “Tour de Columbus.” Following PUBLIC’s performance at the sold-out 20,000-seat Nationwide Arena, Twenty One Pilots singer Tyler Joseph noted how PUBLIC and his band had previously shared a bill in Cincinnati, referring to the 2013 edition of the Bunbury Music Festival.

The day before PUBLIC’s big Columbus appearance, the group released its latest EP, Sweet Lemonade, recorded locally at Moonlight Studios. The EP’s five songs are remarkably crisp and catchy, the most accomplished and ready-for-primetime yet for a band that has been major-label worthy since it came out of the gate. The dance-friendly, synth-drenched opener “4Her” was used in a national TV campaign for Truly Spiked & Sparkling Water earlier this year, another first in PUBLIC’s skyrocketing career.

The band is currently winding down a headlining tour and will play its first local show since late last year this Friday, returning to Madison Live (734 Madison Ave., Covington, Ky., madisontheateronline.com). The all-ages show starts at 8 p.m. with fellow Cincinnati acts Daniel in Stereo and Telehope. Tickets are $12 in advance or $15 at the door.

• Noah Smith has been splitting his time between Ohio and Nashville lately, but the on-the-rise Country singer/songwriter will make a special hometown return this Friday to celebrate the release of a new single, “We’re on Fire,” at Live! at the Ludlow Garage (342 Ludlow Ave., Clifton, liveattheludlowgarage.com). Nashville’s Meaghan Farrell and Greater Cincinnati’s Wilder open the 8 p.m. show. Tickets are $12 in advance or $15 at the door. “We’re on Fire” is the first music from Smith since he joined the roster of Bigfoot Music & Outdoors, a project management/promotions company based in Georgia and Nashville. Smith is collaborating with the company as he works on a forthcoming album project. Visit noahsmithmusic.com for more info.

• This Saturday, Cincinnati-based vinyl record label Soul Step continues its Cincinnati Brewers Series, which pairs an area brewery with a local band, resulting in a limited-edition beer and 7-inch single, as well as a free concert. The third edition of the series features excellent local Indie Folk group Young Heirlooms, which will have its “Bury Me (With My Hammer)” (backed with a cover of Crosby, Stills, Nash & Young’s political anthem “Ohio”) issued on see-through blue vinyl (only 100 copies are being pressed). The accompanying free show Saturday takes place at 8 p.m. at partner Braxton Brewing Company (27 W. Seventh St., Covington, Ky., braxtonbrewing.com), which is also offering a special brew in honor of the occasion that night. Beyond the event, Young Heirlooms’ single is available to those on Soul Step Records’ subscription plan while they last. For details, visit soulsteprecords.com.

Live version of "Bury Me (With My Hammer)":

• Jackie Isaacs, bassist/songwriter for ’80s Cincinnati Punk band Musical Suicide (which was a regular at Newport, Ky.’s notorious Jockey Club venue, opening for bands like Black Flag and The Circle Jerks) passed away on July 26 after years of neurological and spinal issues. She was 54. A memorial for Isaacs (who performed as Jakki Repellent, a reference to her previous band, Indiana’s The Repellents) will be held Friday at 7 p.m. at Herzog Music (811 Race St., Downtown, facebook.com/herzogmusic). Jockey Club-era friends in The MudLarks and Public Figure are slated to perform. In her honor, donations will be collected for Animal Friends Humane Society in Hamilton, Ohio. Find more details (and a way to make a donation if you cannot attend Friday) here.