Photo: Hailey Bollinger
2016 "Electronic" CEA winners Black Signal
In late November 1996 at Over-the-Rhine club Sycamore Gardens, CityBeat hosted the first Cincinnati Entertainment Awards, which honored the contributions of local musicians, as well as Cincinnati theater performers and productions. Since that first year (which included performances by The Tigerlilies, SHAG and inaugural CEA Hall of Fame inductees Adrian Belew, Rob Fetters, Chris Arduser and Bob Nyswonger — aka The Bears — among others), the event evolved greatly. The theater portion developed its own ceremony (before it was halted after a few years) and the CEAs went on to be held in a variety of venues, including downtown’s Taft Theatre, Over-the-Rhine’s Emery Theater, Old Saint George church in Corryville and Covington, Ky.’s Madison Theater.

After the last ceremony in January 2016, CityBeat decided to put a temporary hold on the CEAs as it approached its 20th anniversary, with the date being shifted back to its traditional Thanksgiving-time Sunday. On Nov. 19, the Cincinnati Entertainment Awards return to celebrate the past two years of local music, as well as the past two decades of the awards, this time at the beautifully refurbished Memorial Hall.

The first step is the collection of public nominations. Click HERE to offer your feedback on which original artists deserve to be on the final ballot for the 2017 CEAs in numerous genres, as well as suggestions for categories like Best Live Act, Best Music Video and the returning Best Cincinnati Music Ambassador, honoring artists who have a national/international profile, but continue to honor their Cincinnati roots. 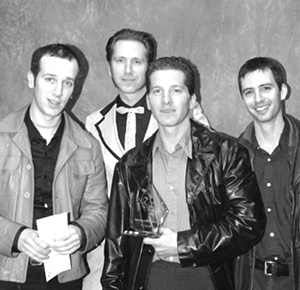 The Tigerlilies win the very first CEA for Album of the Year, for their 1997 effort, 'Space Age Love Songs.'
All public nominations are write-ins, so check your spelling and do your best to determine the most fitting genre category. (If you just nominate on act — say, an acoustic Blues guitarist or Polka trio — and cut and paste the name into every single category, including Electronic/Experimental and Metal/Hardcore, all of your nominations will be discarded.)

The top public nominations in each category will be presented to the CEA nominating committee of Cincinnati-music aficionados (writers, bookers, bloggers, radio hosts, etc.), who will whittle down the final lists of nominees, with the ballot going back to the public for a final vote to determine the winners (except for the Artist, New Artist and Album of the Year categories, which will be determined by the committee).

Stay tuned for more 2017 CEA info in the coming weeks.