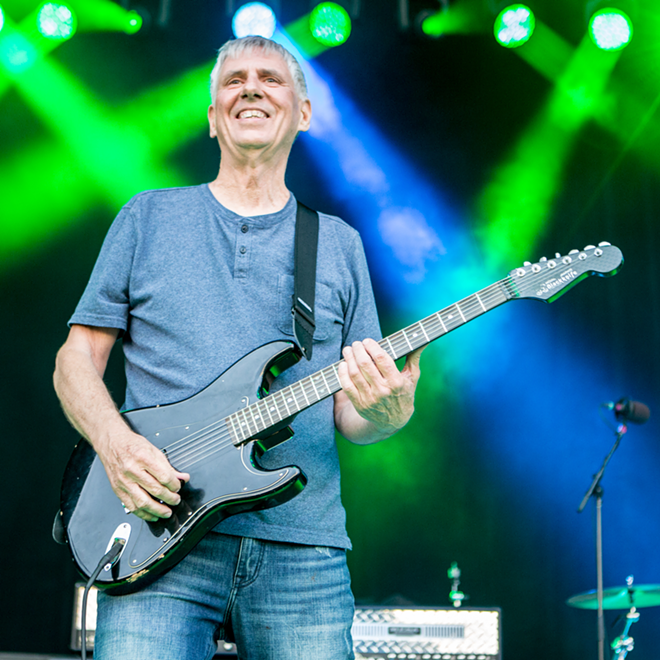 Photo: RobxWallace
Black Flag's Greg Ginn
Black Flag is coming to Cincinnati this weekend, but if you haven’t kept up with the Black Flag saga over the past 30-plus years, it might not be the Punk Rock juggernaut you’re thinking of. Innovative guitarist Greg Ginn — who founded the band 43 years ago — reformed the group in 2013, released a new album, What The…, and has been touring under the name, but no one else from 20th-century Black Flag is in 21st-century Black Flag.

Black Flag not having the same lineup it did decades ago shouldn’t be a surprise to longtime fans or those hip to the group’s often contentious history. The singer most identified with Black Flag is Henry Rollins, who is the voice behind the band’s most well-known recordings; Rollins was in the group from 1981 through 1986, appearing on the legendary Damaged debut full-length and cult classics like My War and Slip It In. But Rollins was the band’s fourth lead singer, following original member Keith Morris (of Circle Jerks), Ron Reyes and Dez Cadena, all of whom had recorded earlier versions of some of the best-known Damaged tracks.

The rest of the Black Flag family tree includes several other notable names, members who joined for a brief spell before splitting off: Chuck Biscuits, drummer for Danzig, D.O.A., Social Distortion and others; Raymond Pettibon, Black Flag’s original bassist and Ginn’s brother, better known for doing Black Flag’s logo and most of its iconic artwork; and Bill Stevenson, drummer/songwriter behind another legendary Punk group, Descendents.

Black Flag’s history is littered with stories of intraband conflict, even in its modern-day iteration. When Ginn reformed the band in 2013, he enlisted former singer Reyes. That same year, Ginn sued Flag, the band featuring Keith Morris, Chuck Dukowski and Bill Stevenson, for touring using the name and logo; Ginn (and his label, the revolutionary but, of course, controversial, SST Records) also sued Rollins and Morris over their alleged attempts to get the trademarks for Black Flag’s name and logo.

Then even later in 2013, in a mutinous move, skateboard hero Mike Vallely jumped onstage during a concert in Australia, took the mic from Reyes and sang the last two songs of the set. It ended up being Reyes’ last show with the band and Vallely took over full-time vocal duties. Current bassist Tyler Smith joined the group in 2014 and drummer Isaias Gil made his Black Flag debut just a few months ago.

Though 21st-century Black Flag has been panned by some, it’s impossible to deny the influence of Ginn and the band’s classic material, which was crucial in shaping modern Punk Rock and also a big inspiration for artists in various other genres.

Black Flag plays Riverfront Live Saturday with The Linecutters and local greats Vacation (who are playing with The Gotobeds at Northside Yacht Club later Saturday night). Tickets are $25 in advance or $30 day of show.