Maynard James Keenan first dreamt up Puscifer as a fictional band in a 1995 episode of the HBO comedy series "Mr. Show." 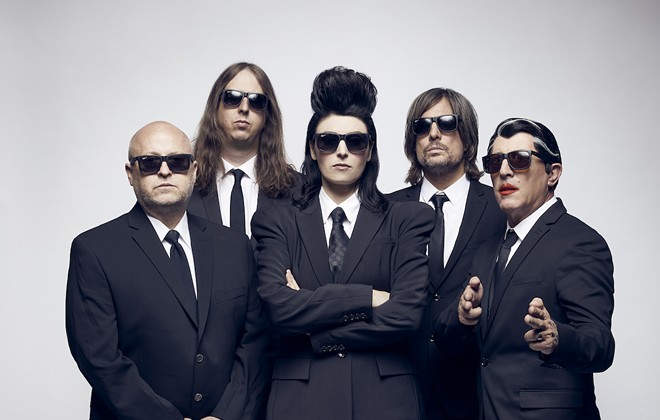 The promo trailer for Puscifer’s latest tour jaunt (dubbed “The Existential Reckoning Tour Version 2.0”) is a doozy — a mock, K-TEL-like TV commercial brought to us via “A Pusciforce TMZanon Jam.” The two-minute clip opens with frontman Maynard James Keenan dressed in character as “Dick Merkin,” a secret agent clad in a black suit, sunglasses, red lipstick and a slick hairpiece. He dances around in triplicate as a voiceover pitch man mentions songs from Puscifer’s most recent album, 2020’s Existential Reckoning.

The 1970s-styled clip intersperses shots of Merkin performing live, his pathetic sing-speak voice vastly different from Keenan’s deft delivery on the band’s actual songs. The teaser “Prepare to be probed at these convenient locations…” then appears on the screen before listing Puscifer’s fall tour stops, including the misspelled “Cincinatti.”

The trailer is certainly in keeping with the band’s conceptually playful roots. Keenan, best known as the frontman for Tool and A Perfect Circle, first dreamt up Puscifer as a fictional band in a 1995 episode of the HBO comedy series Mr. Show. Yet more than a quarter century later, the outfit has now released four full-length albums (beginning with 2007’s “V” Is for Vagina) and currently features two other full-time members: singer/multi instrumentalist Carina Round and multi-instrumentalist Mat Mitchell.

For the uninitiated, Puscifer’s current musical output recalls Nine Inch Nails minus the histrionic — atmospheric electro-rock marked by the vocal interplay between Keenan and Round, who complement rather than rise above the sonics around them.

Word is the current tour is a surreal production, as each member is clad in secret agent getups. They’re accompanied onstage by giant, old-school TVs and dancing aliens.

“I’m just excited for the chance to develop these songs in a live setting,” Keenan said in a recent interview with azcentral.com. “Because the more you play them live, the more they evolve. And I think it’s important to keep breathing life into these things, to never be static, just kind of repeating yourself.”