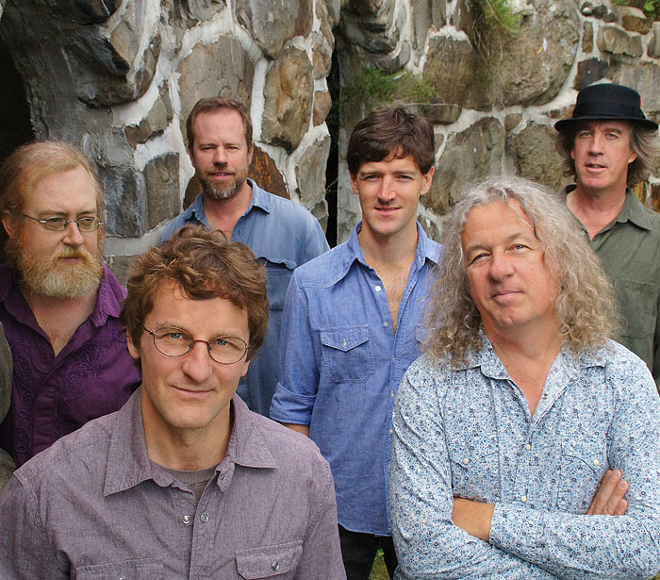 Photo: Erin Mills
Railroad Earth
Some bands toil for years before catching the big break that nets them a record deal and the promise of next-level success. For Newgrass Jam band Railroad Earth, that process took a grueling five months.

Like an Impossible Missions task force, the original sextet was assembled in New Jersey in early 2001 by manager Brian Ross, who crafted a band to back ex-From Good Homes songwriter Todd Sheaffer. Ross named the band after a Jack Kerouac short story and hustled the members into a studio to record a five-song demo within a month of forming, which led to an offer to appear at the Telluride Bluegrass Festival that June.

Two months before Telluride, Ross ushered the band back to the studio to record another five songs, expanding the demo into a complete album. Ross then sent the album, titled The Black Bear Sessions, to Sugar Hill Records and suggested the label come check out Railroad Earth’s Telluride set. The Black Bear Sessions was independently released in early June, the band’s Telluride appearance was a week later (the band’s 10th gig since forming) and Sugar Hill offered them a contract the moment the musicians walked off the stage.

Railroad Earth has been moving down the tracks at a similar clip for the past 15 years. The band’s fans, who dubbed themselves Hobos early on, has grown exponentially since 2001, right along with its catalog — six studio albums, including the group’s most recent, Last of the Outlaws, and a pair of live releases — and a burgeoning reputation for stellar live shows featuring an alchemical knack for improvisation. In short order, Railroad Earth became one of the Jam circuit’s most in-demand attractions, garnering numerous festival invitations and necessitating multiple-night tour stops.

Last year, Railroad Earth backed guitarist Warren Haynes on an episode of PBS’ Front and Center, which led them to hit the studio together for Haynes’ 2015 album, Ashes & Dust. Five of the band’s six founding members — guitarist/vocalist Sheaffer, multi-instrumentalists Tim Carbone and John Skehan, guitarist/saxophonist/whateverist Andy Goessling and drummer Carey Harmon — have remained together from the start; bassist Andrew Altman has been on board for six years.

With a propensity for Grateful Deadish Americana/Roots jams and Phish-like flights of Rock fancy, Railroad Earth has become one of America’s most durable and beloved progressive Bluegrass outfits.