Known for his association with Woody Guthrie, Jack Elliott’s recent work has been among his most successful 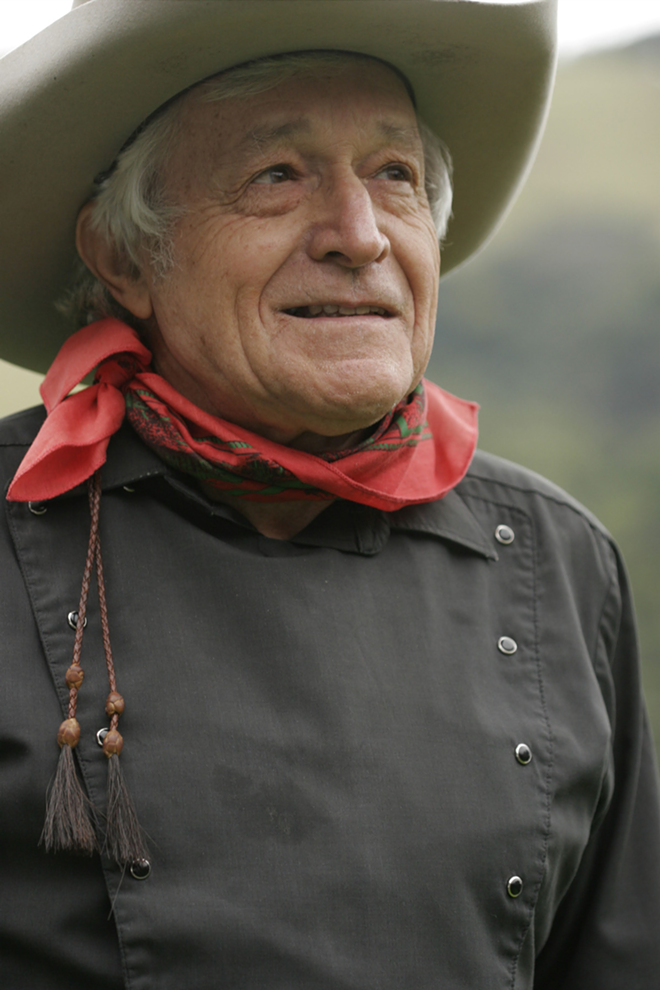 his is the year of the Woody Guthrie Centennial Celebration, with concerts occurring throughout the nation. But there are precious few musicians still active who were close to the Great American Troubadour while he was alive. Guthrie, who wrote “This Land Is Your Land” and many other folk classics, died in 1967 of Huntington’s disease at age 55.

In a strange coincidence, two of Guthrie’s friends are playing in this area on Sunday. Bob Dylan (who is at PNC Pavilion at Riverbend) you probably know — as a young man newly arrived in New York from Minnesota in the early 1960s, he befriended an already ill Guthrie, whose music he idolized.

But the other, who isn’t well known outside Folk circles (although he should be), is Ramblin’ Jack Elliott. On Sunday he closes the three-day Whispering Beard Folk Festival in nearby Friendship, Ind. (Whispering Beard is in the southeast corner of the state, about 20 miles from the Lawrenceburg exit of I-275.) Elliott’s 4:15 p.m. set at Whispering Beard on Sunday fittingly closes out a weekend full of music — including Pokey LaFarge, Langhorne Slim and Justin Townes Earle, plus local acts Magnolia Mountain and The Tillers — that just might not exist were it not for Guthrie’s broad influence.

Now 81, Elliott has led a remarkable life following in Guthrie’s footsteps and making music as a wanderlust-bitten singer-storyteller and acoustic guitar player. Recently, more and more music aficionados have started to recognize him as a national treasure outside of Guthrie’s shadow. After a long absence from record shelves, he’s started making albums again. Signing with the esteemed Anti- label, Elliott’s 2006 release, I Stand Alone, featured a hip guest list (including Flea, Corin Tucker, Nels Cline and Lucinda Williams) and was nominated for a Best Traditional Folk Album Grammy. Elliott’s 2009 Blues covers album, the Joe Henry-produced A Stranger Here, won the Grammy for Best Traditional Blues Album.

Elliott, who lives in northern California but grew up in Brooklyn, N.Y., traces his ramblin’ lifestyle to leaving home at age 15 to join a traveling rodeo as a horse groomsman.

“A rodeo clown played guitar and banjo and used to entertain us between shows up in the stands,” Elliott recalls during a recent phone interview. “As soon as I got home from the trip, just before my 16th birthday, I started playing guitar.”

He grew to admire Guthrie’s records as he learned to play. So in 1951, a New York friend and Folk-music aficionado gave him the phone number of Guthrie, who also lived in Brooklyn, on Mermaid Avenue near Coney Island.

“He said, ‘He’s a friendly guy, he’ll probably invite you to come over.’ So I called Woody and indeed he did invite me,” Elliott recounts. “But he said, ‘Don’t come today, I got a bellyache.’ Turned out he had appendicitis. So I visited him a couple days later in the hospital. He was pretty doped up but he told me to go across the street and introduce myself to his wife Marjorie and she’d show me around. He lived across the street from the hospital.”

Elliott then went with a friend to California, driving along a pre-Interstate route. When he returned, he says, he called Guthrie to tell him, “I’d been singing his song ‘Hard Travelin’ at every bar on Route 40.”

That started a friendship.

“It ended up with me staying in the apartment with him and (wife) Marjorie and (children) Arlo, Joady and Nora Lee,” Elliott says. “I kind of was a babysitter and a sidekick. We played a lot of music together. He was one of my favorite guitar players; he had a marvelous touch on the strings.

“Of course, he gradually lost that from that time forward because of Huntington’s disease, which started to hit him hard right when I moved in,” he says. “I moved in around April 1951 and by September he had to go to the hospital and get checked out because he was having dizzy spells every day.”

Guthrie was not the only interesting person in Elliott’s life in the 1950s. He became friends with the Beat writers through a literary devotee, Helen Parker. He met Jack Kerouac and read On the Road four years before it was published.

“She knew a lot of famous authors,” Elliott remembers. “She introduced me to Kerouac and Allen Ginsberg and a whole lot of authors I had never heard of before. For a period of six months, I had lots of parties with these people, who’d gather at Helen’s apartment on Bleecker Street in the Village.”

Elliott left for England in 1955 and stayed there for the rest of the decade, performing Guthrie songs and releasing on the Topic label both solo albums and projects with a friend, Derroll Adams.

“I was the one who brought Woody’s music to Europe. I treasure that,” he says.

When he returned to the U.S., he found his place in the Folk world as an interpreter, but never became a singer/songwriter — or a star like the younger Dylan.

Elliott’s sets these days are not just a Guthrie tribute.

“I don’t specialize in Woody Guthrie songs, by any means,” he says. “I like to include three or four in a show, and I’ll do about 18 other songs — cowboy songs, one or two Bob Dylan songs, some Rock & Roll, a Kristofferson song. I don’t have any set list.”

He knows he’s come a long way from being born as Elliot Charles Adnopoz, the son of a doctor who wanted him to follow suit.

“I wasn’t sure what I wanted to do in life but one thing I always knew I didn’t want to do was be a doctor,” he says. “I never liked anything about doctoring at all — I didn’t see the glamour, the romance, the heroism. Well, heroic, yes — I knew my dad was a hero. But I couldn’t live up to any of that stuff. So I’ve taken another form of healing people. And I have inherited a lot of his healing talent. I don’t feel bad about not being a doctor.”