Citing influences from yesterday (The Beach Boys, Can) and today (Ty Segall, Ariel Pink), Frankie and the Witch Fingers find fresh, new angles in authentic inspirations without sounding retro for its own sake 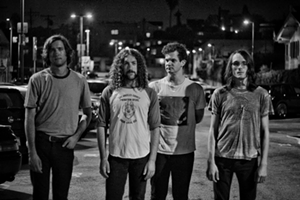 Photo: Nicole Smith
Frankie and the Witch Fingers
Frankie and the Witch Fingers is the sound of a garage full of guitars, effects pedals, surfboards and thrift-store Beatles and Velvet Underground album covers stapled to the walls. The Los Angeles quartet shudders and shakes with the visceral impact of an impromptu jam session between The Hives and White Fence, with Mitch Easter conducting, producing and measuring the precise psychedelic dosage to maximize creativity.

They are the gold standard of Garage/Psych purveyors, fuzzy enough to be inscrutable, loud enough to be undeniable and high enough to see your house from wherever they are.

The Witch Fingers’ seed was planted in 2011 when Indiana University students Glenn Brigman (drums), Josh Menashe (guitar) and Alex Bulli (bass) played together in Prince Moondog. Just before their frontman moved to New York, Brigman began jamming and recording with guitarist/vocalist Dylan Sizemore. When Sizemore’s other band couldn’t keep up with the pace of his songwriting, he and Brigman quickly brought in Menashe and Bulli to form a full band, which they dubbed Frankie and the Witch Fingers.

The first Witch Fingers album, Sidewalk, was recorded by Sizemore and Brigman over a couple of weeks in 2013 and released on cassette. The band’s sophomore full-length, Heavy Roller, was released by Burger Records in 2016. This year has been busy for the Witch Fingers; in addition to a heavy touring schedule, the band released its third album, Brain Telephone, back in February, which was followed by a new vinyl single back in July.

Citing influences from yesterday (The Beach Boys, Can, Hawkwind, Os Mutantes) and today (Ty Segall, The Oh Sees, Protomartyr, Ariel Pink), Frankie and the Witch Fingers find fresh, new angles in authentic inspirations without sounding retro for its own sake.