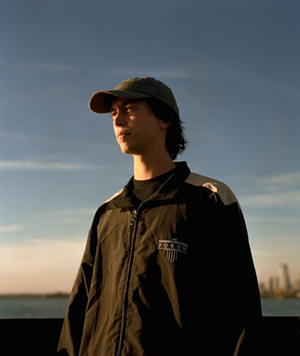 Not to be confused with the YouTuber and cover artist of the same name, Pennsylvanian singer/songwriter Alex Giannascoli officially prefaces his name with a parenthetical “(Sandy)” as of 2017.

The name change doesn’t just give him the weird sense of familiarity you have with a favorite pro baseball player you affectionately refer to as “Scooter,” “Rusty” or “Chipper.” It’s also a reference to one of the first songs Giannascoli posted to Bandcamp more than seven years ago — a testament to the rich lore and continuity in his imagined world of witches, rebellious teens and pet dogs who seem to exist in the same social hierarchy as humans.

“My name is Sandy, I’m 14 years old,” he sings on his self-titled single, whispering over frenetically-strummed acoustic guitar chords. “My brother says he hates me and Satan is his master.”

That’s the extent of what the lyric sheet reveals, despite the many other lines Giannascoli mumbles into the microphone, barely registering in the mix. But it’s somehow all you need to know. (Sandy) says as little as possible, sparking the imagination just enough to let listeners paint the missing details into their subconscious.

His latest record, Rocket, is arguably his best yet, filled with water-logged Americana: droopy and saturated, but undeniably twangy. While speckled with Giannascoli’s familiar trademarks (vocals distorted beyond recognizability, guitar soundscapes that suggest a steady diet of Modest Mouse LPs), the new album features an impressive array of sounds that are totally new to Giannascoli’s catalog. When he’s not channeling the spirit of Elliott Smith, he’s rapping and/or screaming over brutal drum breaks on “Brick” or layering autotuned squeals on “Sportstar” or trying his hand at Bluegrass songcraft on “Bobby.”

And, somehow, (Sandy) pulls it all off seamlessly. While lo-fi Twee Pop is definitely in Giannascoli’s sweet spot, exploration of new sounds is his default setting. It’s up to fans to brace themselves for the sonic curveballs on the horizon and to embrace the unknown.

“Without fail, every time I’ve loved a song and looked it up to figure out what it’s about, I won’t care about it anymore,” (Sandy) told Stereogum. “It’s this personal magic… the reason you enjoy (music) is because of its unlimited potential, the inability to really understand it.”