Remembering Foo Fighters Drummer Taylor Hawkins, Who Has Died at 50

Taylor Hawkins, the vibrant and maniacal drummer for Foo Fighters, has died while in South America with the band. 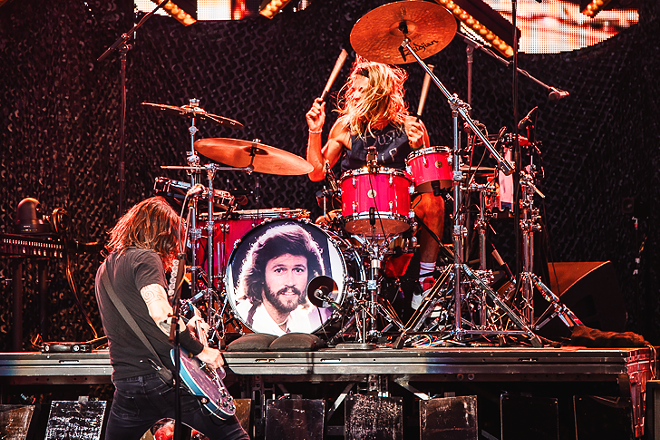 Taylor Hawkins, the vibrant and maniacal drummer for Foo Fighters, has died while in South America with the band. He was 50 years old.

“The Foo Fighters family is devastated by the tragic and untimely loss of our beloved Taylor Hawkins,” reads a message from the band, which they posted to social media on Friday night. “His musical spirit and infectious laughter will live on with all of us forever.”

No cause of death has been given.


Wiry, towheaded and an absolute maniac behind the drums, it was easy to forget that Hawkins had aged past his twenties. Just recently, fan footage showed the drummer rocking tiger-print leggings behind the kit at a show, an only slightly absurd departure from his typical uniform of shorts and a tattered T-shirt or tank top. If Dave Grohl is Foo Fighters’ leader and mastermind, Hawkins was its lifeforce.

Hawkins’ career started much earlier than his time with Foo Fighters. His first major role within the music scene was as a touring drummer for Alanis Morissette, traveling with her band during the Jagged Little Pill tours. He even appeared in the music videos for "You Oughta Know” and “You Learn.”

However, it was only a matter of time and good luck before Hawkins soon found himself on the throne, drumming for Foo Fighters after their original drummer departed in 1997.

In the early 2000s, Hawkins struck out on his own, testing out a solo project: Taylor Hawkins & the Coattail Riders with former Morissette bandmate, Chris Chaney. The band released its self-titled debut in 2006. More recently, he and Chaney collided with another Rock powerhouse, Dave Navarro, under the moniker, NHC (their last initials). And, of course, there were the various side projects undertaken by Hawkins and the rest of the Foos, like The Dee Gees.

Over the course of his 25-ish years with Foo Fighters, Hawkins was as well-known and well-loved as Grohl himself. During live shows, Hawkins would often come to the front of the stage to regale concertgoers with various cover songs and the kind of goofiness fans had grown to expect from the drummer.

Locals will be feeling his passing especially, as the Foo Fighters opened the new Andrew J Brady Music Center with a sold-out concert in July 2021. Hawkins wore a homemade “Dusty RIP” shirt, honoring ZZ Top’s Dusty Hill, who had died hours before the show. And later took the mic for a Queen cover, much to the delight of literally everyone.

As news of his death spread on Friday night, the music world echoed their love and appreciation for Hawkins.

“Taylor Hawkins 1972-2022. Our deepest sympathies to Taylor’s family, his fans, and of course his band,” tweeted The Smashing Pumpkins, along with a photo of Hawkins behind his kit.

Taylor Hawkins 1972-2022.
Our deepest sympathies to Taylor’s family, his fans, and of course his band. pic.twitter.com/qlEaQK0uui


“@TaylorHawkins was truly a great person and an amazing musician,” tweeted The Prince of Darkness, Ozzy Osbourne, “My heart, my love and my condolences go out to his wife, his children, his family, his band and his fans. See you on the other side - Ozzy.”


. @TaylorHawkins was truly a great person and an amazing musician. My heart, my love and my condolences go out to his wife, his children, his family, his band and his fans. See you on the other side - Ozzy

Tributes to Hawkins rolled in from everyone in the industry from Finneas to Tom Morello and Ringo Starr.

God bless you Taylor Hawkins. I loved your spirit and your unstoppable rock power. Rest In Peace my friend. pic.twitter.com/AkiRLF2L3e

In his 2021 autobiography, The Storyteller: Tales of Life and Music, Grohl told many stories from his friendship with the drummer. He described the charismatic drummer as a best friend, brother and “spirit animal.”

Hawkins is survived by his wife, three children and his band, as well as a world who loved him dearly.