Nearly 25 years after its final show, the locally-spawned Rock outfit returns Dec. 28 to tear the roof off of the Woodward Theater 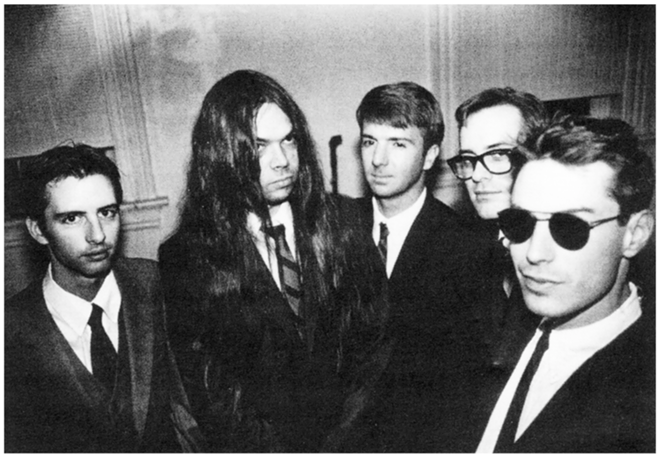 Photo: Provided
The Mortals in the 1990s

“You know how dogs live in the moment?” asks William Grapes, lead guitarist of late Cincinnati Garage Rock icons The Mortals. “That’s how we were. We didn’t have a grand plan.”

The Mortals were birthed in 1989 and burned out by ’95, leaving in their wake three LPs, five 7-inch singles and five compilation appearances. The band’s sound was one of stripped-down, no-frills frenetic urgency, a hybrid of Midwest Punk and a British Mod direction, with titles like “Atomic Cocktail,” “Nitroglycerin” and “Bulletproof” leaving record needles scorched around the world. Their live shows became the stuff of legend.

“There were (other) Garage bands but nobody had the power that The Mortals had,” says Darren Blase, his voice crackling with excitement as the memories flood back.

“Man, Grapes was raging,” Blase continues. “They were my favorite band.”

Appropriately enough, The Mortals would be featured on the first 7-inch issued by Blase on his then newly revived Shake It Records label back in 1993.

“They were a wild Rock & Roll band, up to 10,” echoes producer and tour manager Jim Davidson. “The best rave-ups since The Yardbirds. Bill even smashed a few guitars, here and there. We had good fun.”

The Mortals were young but experienced scene vets who’d already cut their teeth on local stages in bands like the Cybermen, which had included Grapes and fellow Mortal Mike Grimm on drums. When the Cybermen folded and The Mortals formed, they tapped Denny Brown to join on rhythm guitar, added Matt Becher on bass and handed a microphone to Steve “The Tongue” Gatch.

It proved to be quite the lineup. Belting out lyrics like an unhinged beast, Gatch “was a total trip,” recalls former Cincinnatian Peter Aaron, who booked many of the band’s early gigs.

“I was influenced by and admired Iggy Pop and (The Cramps’) Lux Interior particularly,” Gatch says, then adds, “there may have been a little Andy Kaufman and Pee Wee Herman factored in as well.”

At stage right, Grapes was no slack on lead guitar (“the best guitarist in Cincinnati, hands down” Aaron says, while Davidson emphasizes, matter-of-factly, “there were nights when he was the best guitarist in the world”). In ’93, Scott Haggerty took over for Becher, and the band would continue in that form for a couple more years, leaving club stages in shambles during frequent weekend trips to neighboring regions.

“If you broke out of Cincinnati, you had to be good, because you kind of started out 10 yards behind the starting line compared to bands in Chicago or New York or L.A.,” Davidson says with a chuckle. In those days, Cincinnati’s club scene was dominated by cover acts, and venues willing to book original bands were few and far between.

“But outside of Cincinnati, The Mortals were really well respected,” Davidson adds.

The Mortals’ most fateful local gig came as an opening act for Northwest-based Mono Men at Everybody’s Records in Pleasant Ridge. After the show, the bands hung out over drinks at a neighboring bar.

“We got along great, and Dave (Crider, Mono Men singer/guitarist and head honcho at the soon-to-be-infamous Bellingham, Washington-based Estrus Records) was like, ‘Send me something,’ ” Grapes says.

The band initially put it off but, upon later finding out that Crider had followed up with Blase to see what the band had been up to, they rushed into Ultrasuede Studio (then located in Northside) with Davidson and engineer Dave Davis to cut a handful of demos.

“That was so freakin’ long ago,” Crider says, audibly reaching past mental cobwebs for recollections and anecdotes. “It’s a lot of beers under the bridge, man. Well, I’ve always loved the band, and I still do. I can’t think of another band that was really doing exactly what they were doing, that hard Rock edge they had.”

The Mortals’ Ritual Dimension of Sound would be the fifth LP released on Crider’s relatively young label, its roster eventually growing to include acts like The Mummies, Man or Astro-man?, The Fall-Outs, Electric Frankenstein, Phantom Surfers, Teengenerate, The Woggles — a real who’s who of the early ’90s Garage Punk landscape.

“I was able to talk them into coming out here (to Washington) to record, and that was a pretty big trip for them,” Crider says.

“That first trip to Seattle was amazing,” Grapes says.

They recorded at Egg Studios with legendary Northwest engineer Conrad Uno and even utilized a soundboard from the old Stax studio. As the band laid music to tape, a steady parade of Seattle musicians would swing by the studio to check in. Between that experience and an accompanying gig at Seattle’s Off Ramp Café, they’d cross paths on that excursion with members of Mudhoney, Tad, “a couple of the Soundgarden folks, and a Mother Love Bone or maybe a Green River dude,” recalls Davidson.

Once that debut full-length hit record stores, accumulating fans outside of town came easy for The Mortals.

“It was always really strange to go to a new town and be told we were headlining, (but) there were Estrus die-hards, enthusiastic to book bands from the label — the Estrus seal of quality,” Grapes says, with a grin. “So we were really fortunate.”

The band would eventually chalk up about 70 performances, most of them Midwestern dates, while also spreading the gospel to fans in Chicago, San Diego, Austin, Texas and the deep South.

The Mortals’ unceremonious final gigs came in August 1994, appropriately enough a string of shows with the Mono Men. The band was “getting worn out and everyone was ready for a change,” Grapes says. “Bands are small businesses and that requires organization. Our lack of planning eventually caught up with us.”

Members went their separate ways: Grapes joined the Mono Men for a short tour, then resumed his position with a reformed Cybermen, before playing with Becher, Ricky Nye and Chris Novy in a Hammond organ quartet called the Viscount 7. Brown joined The Tigerlilies and then, in his words, left “to start a family and I haven’t played in a band since.” Grimm and Grapes have accompanied Cincinnati singer/songwriter Maurice Mattei; Grimm also played with Los Honchos for a spell and has a new project called the Absolute Beginners. Haggerty would spend time with a handful of different projects, including The Pariahs. And Gatch sang for Rip Rock and Raunch and worked on a couple of locally produced films.

It would seem The Mortals and their legacy were all but distant history. Then, just last August, the band members convened at a Clifton coffee shop to discuss the likelihood of a reunion. They decided “everybody has to be in, or it doesn’t happen; that seemed to be a fair way to do it,” Grapes says.

Photo: Provided
The Mortals today, rehearsing for their Dec. 28 show at the Woodward Theater

“Once everybody realized what they needed to do, they just did it,” the guitarist says of early rehearsals. “I think Steve has the toughest job — he had five years to learn all these lyrics, and now he only has like three months to remember them. Mike also has a tough job — he’s been concentrating more on playing guitar lately. It’s kind of a re-learning process for all of us.”

As for Grapes, renowned for delivering those manic guitar leads with reckless, youthful abandon?

“It’s definitely a style I don’t play much anymore,” he says. “As odd as it sounds, I’ve got more of a Curtis Mayfield style I’ve been working in.”

“After however-many decades, I’m finally learning how to play properly,” he adds, with just a hint of self-deprecation.

Beyond the upcoming reunion show, the band hasn’t laid out any expectations for themselves.

“Planning anything further would be really out of character for the band,” Grapes says. “Not thinking about the future worked well for The Mortals. I’m fine just hanging out with these guys, having a beer.”

Grapes says being a Mortal in 2018 is much different than it was almost a quarter of a century ago.

“It sounds strange to say, but our lives are so much richer now,” he says. “We have so much life experience (now), we can talk about stuff on a deeper level. If you think about it, most guys get in a band when they’re 15 or 16, hanging out with other guys. When you’re that age, I don’t think there’s much growth going on. You’re in the pod with people just like you, and there’s not a whole lot of maturity.”