Expanded to a quartet, the band pulls through Southgate House Revival for a show on April 8 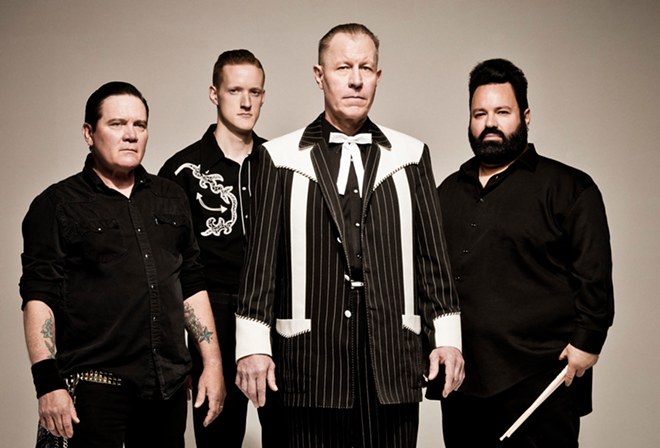 “There were these young people there, and this young girl came up — and I say young, she was late teens/early 20s — and she said, ‘You guys are going to bring back Rock & Roll,’ ” Heath says.

Who knows whether this young lady was familiar with the catalogs of Chuck Berry, Jerry Lee Lewis or Little Richard. But Heath says her observation was right on point.

This is, after all, the man whose band released an album in 2004 called Revival, featuring a title track with lyrics like, “I’m lookin’ for revival/Across cloudy sky/I’m lookin’ for the sunshine/Teardrop in my eye.” But Heath isn’t crying — he’s pinpoint focused when it comes to his band’s Rock & Roll resurrection. And a lot of it comes down to the driving rhythms.

Heath has been recording songs that fit his strict definition of Rock & Roll since he formed the Reverend Horton Heat in the late 1980s. And with the group’s new album, Whole New Life, he is focusing more on creating songs in the vein of music’s original Rock & Rollers.

But that isn’t the only thing that makes Whole New Life stand out in the Reverend Horton Heat catalog. The album, released in November, marks a new era for the band itself. After being a trio for nearly all of its 30-plus-year history, the group is now a quartet, with Matt Jordan playing piano and organ.

There’s also a new drummer, Arjuna “RJ” Contreras, who took over for Scott Churilla just prior to the recording of Whole New Life. Churilla, over two stints behind the drum kit, spent 16 years with Reverend Horton Heat, easily the longest tenure of any of the handful of previous drummers that have played in the band, which also includes longtime bassist Jimbo Wallace.

Contreras is making his presence felt with his command of a variety of styles of rhythm. But it’s Jordan, whose piano is the most noticeable new ingredient, who helps the band achieve more of the early Rock & Roll vibe that Heath wants to emphasize going forward.

Heath points to the new album’s title track, “Wonky,” “Perfect” and “Got It In My Pocket” as prime examples that embody that vibe. These songs still feature Heath’s guitar work prominently (especially on the latter pair of tunes), but are aided greatly by Jordan’s driving piano lines.

Whole New Life, though, is not a one-dimensional, pedal-to-the-metal album by any means. “Tchoupitoulas Street” is a rare foray into New Orleans R&B. There’s a bluesy, barrelhouse feel to “Hog Tyin’ Woman,” a tune that continues Heath’s tradition of writing the occasional off-the-wall funny song. And the ballad “Don’t Let Go of Me” is one of the few songs that downshifts the tempo, mixing Rock and hints of classic R&B over a measured beat. The song also gives Heath the opportunity to showcase his voice as he croons his way through the song’s sturdy melody.

“I’ve been working really hard on my voice,” Heath says. “I should have done it before. I’m singing a little bit higher on this album and I’m showing a little bit more range.”

“It’s by far the most positive album I’ve ever written lyrically,” he said. “Most of my stuff is kind of dark and blue, and this one has some positive ideas going on.”

The quality of the Whole New Life album is impressive, especially considering it was recorded under less-than-ideal circumstances. The band’s recording session at Modern Electric studio in its home base of Dallas was fast approaching when Churilla left the group. But Heath was able to get Contreras on board just in time to be ready to record.

“In about 10 days’ notice, he learned all of these songs. We went in the studio, rehearsed them for a while and recorded it,” Heath says, noting the actual recording was completed in just two days. “That was the only way we could do it. It was crazy because we were out of time. We had that time blocked off to do an album. We had to do it or else (there would be) no album for like two years.”

With the basic tracks recorded, Heath then re-did some of his guitar parts and vocals at his own Dallas studio, had Jordan add his piano parts and added some miscellaneous overdubs and backing vocals.

Heath likes the sound of the new four-man lineup. He said he’d thought of adding piano at various points in the past, but could never find a keyboard player who was available for the band’s extensive touring schedule. The group’s primary tour-bus driver saw some videos of Jordan and told Heath his style might work for the band.

“I really do love Matt,” Heath says. “He’s very positive, and then he practices incredibly hard. One day we had a day off and it was about 50 degrees outside. We were parked in the Kmart parking lot, and he pulled all of his stuff out of the trailer and pulled this piano out of the trailer and wheeled it out in the parking lot and practiced for like five or six hours. He had to go in and get some gloves in Kmart and cut the fingers off so he could play it. It was so cold, I can’t believe he was doing it.”

Fans can expect to hear upward of five songs off of Whole New Life when Reverend Horton Heat comes to town. Heath reports that the new material has been received well by fans. And the addition of piano is allowing the group to put a fresh spin on some of its older songs.

“We’ve got Matt playing on pretty much the whole set,” Heath says. “Now what I have done, on certain songs, I let him shine. I say ‘Go, go, go.’ On certain other songs, I say, ‘Man, it’s probably best for our fans and for everybody in general if you just kind of do a chord pad.’ But in general, we’ve been throwing in (piano) solos on some of our old songs.”

“It sounds killer,” he adds proudly.