Just a small-town girl, living in a lonely world. She took the midnight train going anywhere... 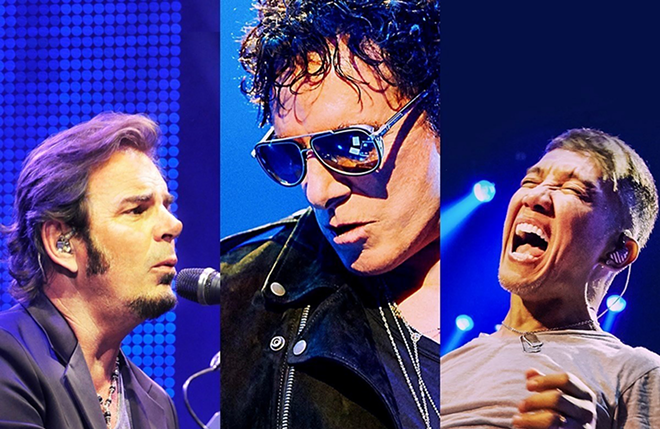 If you're ready for an evening of belting out classic hits like you're on a karaoke stage, mark your calendars for April 24, 2022, when Journey and Toto head to Cincinnati's Heritage Bank Center.

The Freedom Tour kicks off Feb. 22 in Pittsburgh before heading to 40 cities across North America. Toto hops on as support April 7.

Tickets for the Cincinnati show go on sale to the public at 10 a.m. Nov. 19 at ticketmaster.com and the Heritage Bank Center box office.

Rock & Roll Hall of Famers Journey have had 19 top-40 singles since their formation in 1973 and have sold more than 100 million albums. According to a press release, their Greatest Hits album is diamond-certified, meaning it went platinum 15 times. And their sing-along standard "Don't Stop Believin'" has been streamed more than 1 billion times.

The band lineup currently features founder and lead guitarist Neal Schon, keyboardist Jonathan Cain, keyboardist Jason Derlatka, drummer Deen Castranovo and lead singer Arnel Pineda. Filipino rocker Pineda took over vocals in 2007 after Schon saw his band performing covers of hits from Journey and others like Aerosmith and Led Zeppelin on YouTube. (Popular lead singer Steve Perry, who was with Journey at the height of their success in the 1970s and '80s, left the band in 2007.)

“It’s that time — time to get back to where we are used to being — on stage,” Schon says in the release. “We are looking forward to shifting into high gear and bringing you the best show possible. The band is running on all 12 cylinders and very excited! Please come and join us once again for an evening full of rocking stage connection fun. See you soon Friends.”

Toto's Steve Lukather says, “'On behalf of myself and the band, we are very honored and excited to do this tour with our old and dear friends Journey. Gonna be a great night of music, and as all the guys are lifelong friends... a blast off stage as well."

Toto's famed song "Africa" has seen a resurgence lately — Weezer released a cover of it in 2018 and in 2019 a Namibian artist created a sound installation that pumped out “Africa” on an endless loop in the desert — and it was just certified six-times platinum last year.

Please enjoy videos of top hits from both Journey and Toto, which will now be stuck in your head for the rest of the day.

And, just for good measure, here's Weezer's cover of "Africa":