The cards feature portraits and bios of musicians with links to Greater Cincinnati who had a big impact on music locally, regionally, nationally and/or internationally

The first set in a series a trading card decks that tell the story of Cincinnati’s rich music history will be available beginning this Friday, July 19 at Shake It Records (4156 Hamilton Ave., Northside). The “Volume 1” deck can also be ordered online ($15.99) at shakeitrecords.com.
click to enlarge 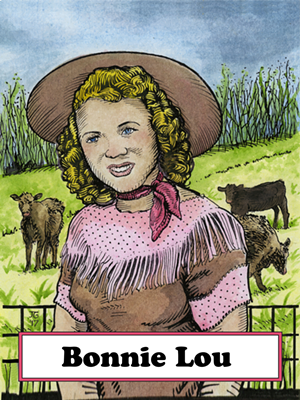 The Cincinnati Musical Legends Trading Cards series is spearheaded by Shake It Records with an assist from ArtWorks. Cincinnati comics artist and sign painter Justin Green is the lead artist on the project; if you’re a Shake It fan, his artwork will ring familiar, as he’s responsible for the “marquee” sign above the store’s front door.

“I’ve been entrusted with these incredibly talented geniuses and I want to give them my knowledge without cramping their style,” Green told CityBeat's Steven Rosen last summer. “So they’re my product really, not the cards.”

Local artist Joe Walsh was the project manager and Josie Masset, Katelan Thomas and Kadin True were apprentice artists. Joe Kuth was a guest artist on the project.

musician with links to Greater Cincinnati who had a big impact on music locally, regionally, nationally and/or internationally. On the flip side are “snapshot bios” of each subject. Shake It’s Darren Blase was inspired to create the series by artist R. Crumb’s famous trading card sets dedicated to Blues, Jazz and Country music pioneers. “You will quickly notice that some of the subjects of these cards are more well known than others but collectively they help tell the great musical history of The Queen City,” the deck’s introductory card reads. “Hopefully the snapshot bios on the back of each card will prod you to explore beyond the 100 or so words we are limited to due to space. Each one just scratches the surface of some very fascinating characters and we encourage you to explore!”

The first deck consists of 36 subjects Blase and Co. randomly chose out of an initial list of over 150. The plan is for there to be three more volumes in the series. The intro card says future decks will spotlight people like Pigmeat Jarrett and Orangie Ray Hubbard and venues like Aunt Maudie’s and The Jockey Club.

Friday there will be a release party at Shake It's store in Northside in honor of the card deck and the debut solo album by Cincinnati singer/songwriter Chuck Cleaver, Send Aid, which releases the same day through the Shake It label. It's a fitting combo release event — Cleaver's certainly worthy of inclusion in a future deck.