Sidewalk Chalk with The Almighty Get Down 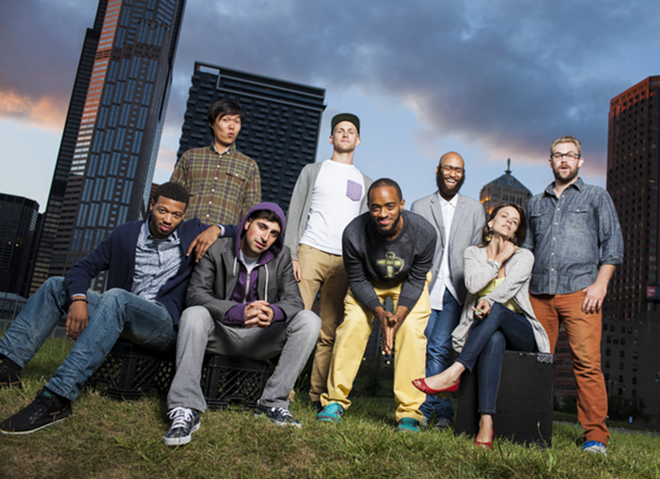 Sidewalk Chalk's just-released second album, Leaves, opens with a live clip in which frontdude/rapper Rico Sisney and frontlady/singer Maggie Vagle ask a crowd to shout out the Hip Hop crew's name on the count of three. It's a fitting intro, for this Chicago octet is, first and foremost, interested in interaction, about stirring minds and moving asses.

The jazzy ensemble mixes live drumming, keyboards, horns and even a tap dancer into a heady brew, all coalescing around the vocal talents of Sisney and Vagle.

"Many of the songs on our first album date back to when this was just me and Rico," Vagle recently told the Chicago Tribune. "Leaves is totally collaborative, written together. That's the main thing I am excited about. We took chances and stretched ourselves, and it's beautiful."

The piano-tinged "To Love You" finds the duo's complementary approaches — Sisney is to-the-point and low-flying; Vagle is sultry and soaring — backed by an eclectic, mood-jumping arrangement that's at turns ethereal and oddly menacing. "Nashville" sounds like Erykah Badu backed by The Roots, a slow-burning jam in which Vagle repeatedly sings that someone has got to swallow their pride, while Sisney slides in to say that, "I wasn't prepared to admit I was wrong/Ego told me it's better to just be strong."

Album closer "Tommy & Donna" is another genre-jumping curiosity, yet another example of Sidewalk Chalk's unique ability to make familiar musical elements into something unexpected.