Andy Black brings a blend of Goth and Synth Pop to Bogart’s. 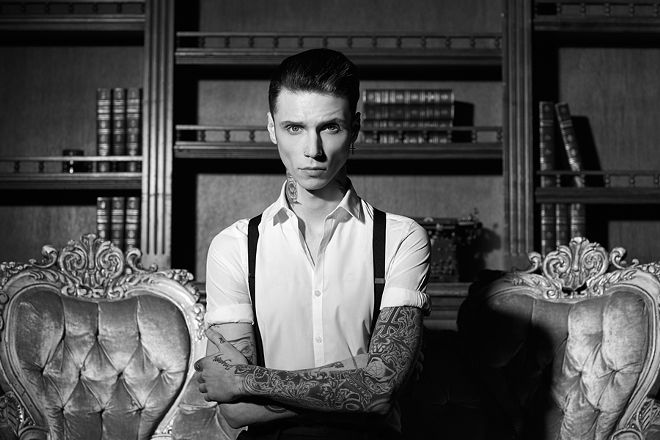 Photo: Jonathan Weiner
Andy Black
Andy Biersack’s upbringing in Cincinnati’s Delhi neighborhood was no walk in the park, considering his penchant for Goth fashion and makeup and his dreams of forming a Horror/Punk band as a Cincinnati tween. While Biersack was a student at the School for Creative and Performing Arts, he formed the nascent version of the band he had long envisioned, Black Veil Brides, although the band’s membership was a revolving door due to a general lack of commitment.

In 2009, just after his 18th birthday, Biersack relocated to Los Angeles, living in his car while he attempted to capitalize on the buzz created by Black Veil Brides videos on YouTube and music posted on MySpace. Assembling a new version of the band, Biersack scored a label contract with Rock/Metal label StandBy Records for Black Veil Brides’ debut album, We Stitch These Wounds, which did fairly well on the indie charts. That success and Black Veil Brides’ unprecedented merch movement through Hot Topic resulted in a contract offer from Lava Records. The band’s follow-up, 2011’s Set the World on Fire, received a mixed critical reaction but did well overall, particularly with the band’s fervent fan base, and the album’s title track wound up on the soundtrack to Transformers: Dark Side of the Moon.

In 2014, after releasing two more Black Veil Brides albums, Biersack announced that he was pursuing a side project steeped in his love of Goth and ’80s Synth Pop, which he had dubbed Andy Black. Feeling that this particular direction wouldn’t fit within the musical paradigm he had established for the band, Biersack aligned with former Black Veil Brides producer/Goldfinger frontman John Feldmann for the debut Andy Black single, “They Don’t Need to Understand.”

Last year was a watershed one for Biersack — he released his first full-length album as Andy Black, The Shadow Side, in May, and just days before Christmas unveiled the video for “The Outsider,” the first single from Black Veil Brides’ as-yet-unnamed fifth album, slated for release this year. Already out this year is a documentary filmed on Andy Black’s first tour to support The Shadow Side, the last leg of which will conclude next month.

Biersack — who was just announced as the host of the next Alternative Press Music Awards — has been emphatic in trying to allay fans’ concerns that he might be moving away from the band’s sound and even does a Black Veil Brides cover in his Andy Black sets.