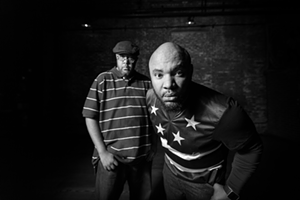 Photo: Nicole Mago
Blackalicious
Though they’d known each other since attending middle school together in Sacramento, Calif. in the ’80s, ridiculously imaginative MC Gift of Gab and equally explorative producer/DJ Chief Xcel didn’t officially join forces until the early ’90s when the pair formed Blackalicious. The duo would go on to become a key component of Northern California’s rich progressive Hip Hop scene, which stands as something akin to a broader music version of Andy Warhol’s Factory in the genre’s history books, producing influential art that respected tradition but also turned it inside out and moved the artform forward.

As part of the revolutionary Solesides collective (which included like-minded artists like DJ Shadow and Lyrics Born), Blackalicious made its initial splash in the indie Hip Hop world with singles and EPs like Melodica and 1999’s A2G, which featured “Alphabet Aerobics,” a time-signature-twirling classic that served as the perfect showcase for Gift of Gab’s impossibly clever writing and brilliant experiments in lyrical flow (something eternally and perfectly matched by Xcel’s talents, though Cut Chemist produced that particular track). The legacy of the jaw-dropping “Alphabet” lives on to this day — in 2014, actor Daniel Radcliffe (of all people) performed the song with The Roots on The Tonight Show, while 2015 saw the duo rewiring the track as a sports anthem for Bleacher Report.

The twosome continued to push the boundaries of Hip Hop creativity on subsequent recording projects, which included their 2002 major-label debut, Blazing Arrow (featuring guests like Zack de la Rocha and Gil Scott-Heron), and the acclaimed Anti- Records release The Craft in 2005, on which Blackalicious incorporated more live instrumentation into its dazzling, groovy mix.

The years after The Craft were marked by solo albums and other outside projects, as well as a significant health issue. Gift of Gab suffered kidney failure in 2012, leading to strenuous, ongoing dialysis treatments (he continues to await a kidney donor). Though it has kept him from touring as much, it hasn’t slowed him down artistically. In 2015, Blackalicious put out its first album in a decade, Imani Vol. 1, the first release of a planned trilogy. Imani found the duo using the crowd-funding site Pledge Music, which not only assists artists financially, but also creates intimate connections with fans (via exclusive messages, perks and other offers). Gift of Gab is expanding that experience with his current solo work. Ahead of his fourth solo album, he teamed up with the site Patreon to offer special advanced music, merch, Q&As, videos and more to contributing “patrons,” while also donating 10 percent of proceeds to the National Kidney Foundation.