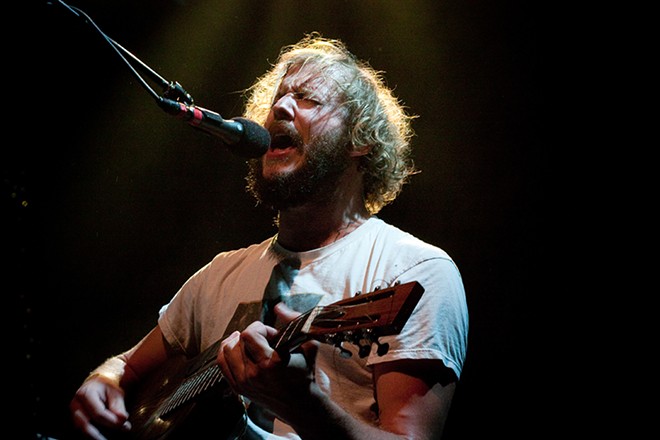 Bon Iver moves at a deliberate pace. The band — which is essentially singer/songwriter Justin Vernon backed by various players — has released just three full-length albums since the 2007 debut For Emma, Forever Ago, an affecting folk-fortified breakup record that remains a classic of its kind. Vernon prefers to perfect his visions, evidenced by the gradual sonic evolution from the straightforward acoustics of For Emma to the obtuse, electronically enhanced textures of his most recent effort, 2019’s i, i.

While Bon Iver’s studio efforts grow more otherworldly, their live shows remain tethered to earth. Vernon’s distinctive falsetto, which is manipulated via Auto-Tune and other masking techniques in the studio, emanates from a more flesh-and-blood place in a live setting, giving the songs a less alien feel than their recorded counterparts. Reports on the current tour – Bon Iver’s first since the pandemic hit – reveal a set list heavy on tunes from i, i, a record that combines the traditional instrumentation (acoustic guitars, horns, strings and piano) of For Emma with the more experimental stylizations of 2016’s 22, A Million.

Vernon’s rise from rural Wisconsin folkie to multi-Grammy-nominated artist and collaborator with everyone from Kanye West to Taylor Swift is one of the more curious developments of the current age. The spotlight can be a strange place to be for a guy who would rather revel in the creative aspects of his chosen endeavor, but it’s something he’s come to accept.“Power has come to me,” Vernon told Pitchfork in a 2019 interview, “but it’s not fun to wield by yourself, and it’s not as useful if it’s just your vision.”

He uses that power to benefit various progressive interests and causes, including the recent single “PDLIF,” which he wrote for frontline health-care workers during the worst of the COVID-19 pandemic. The acronym stands for Please Don’t Live in Fear, a phrase Vernon has come to embody in multiple ways.

Bon Iver will play PromoWest Pavilion at Ovation at 5:30 p.m. June 21. Bonny Light Horseman will open the show. There are no COVID-19 requirements. Info: promowestlive.com.

Sound Advice: The Chicks Won't Be Holding Back During Their Upcoming Cincinnati Performance: The Chicks are performing at Riverbend Music Center on June 21.

Louisville Rapper Jack Harlow to Kick off 'Come Home The Kids Miss You Tour' in Cincinnati This Fall: Tickets for the tour go on sale June 15.